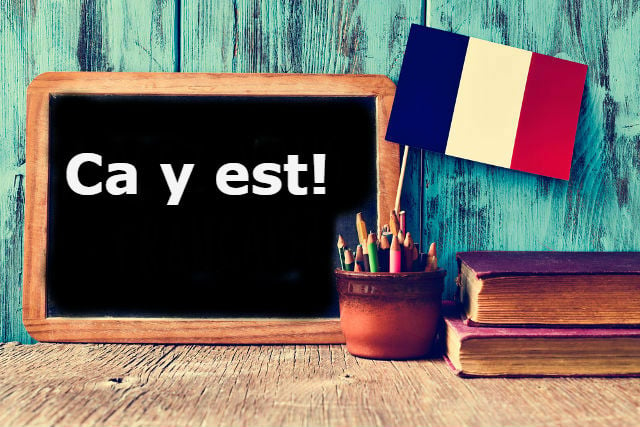 Why have we chosen it?

“Ça y est” is one of those expressions that pops up all the time in spoken French, and sounds deceptively simple.

“Ça” comes from “cela” meaning “it” and “est” is a form of the verb “to be”. “Y” would usually refer to a place, but in this instance just acts as a connector between the two other words.

So, literally, it means “it is there.” But the words are pronounced altogether as one so it sounds more like “sigheeay” than “ça y est”.

But while the individual words might be familiar, just piecing them together won’t really help you get to grips with how to use (or understand) this expression.

“Ça y est” is mostly used to acknowledge either the beginning or end of something, perhaps an activity. You'll often see it written with an exclamation mark because it expresses relief or excitement.

When used before an event it can help to give a feeling of anticipation. You might hear commentators use it before a sports match or a friend use it before they go on holiday to mean something like “here we are” or “this is it” or “we're off”.

Using “ça y est” at the end of event normally implies a bit of relief that it’s over. You might hear someone use it after they’ve just finished doing something difficult or that took a while meaning “all done!”, “finished!” or “that's it!, or “at last!”

This expression is less used in writing although you might come across it written informally as “sayez” in a text message.

Although we can see it used in some headlines such as the ones below.

“That's it, Belgium are finally on top of the world ahead of France”, reads the first one. While the second one refers to the start of the new school term. “Back to school in Seine-Saint-Denis: This is it, it's time”

“Ca y est” can also be used as a question to ask if someone has finished or if they have understood something. So in English it be translated to “got it?”