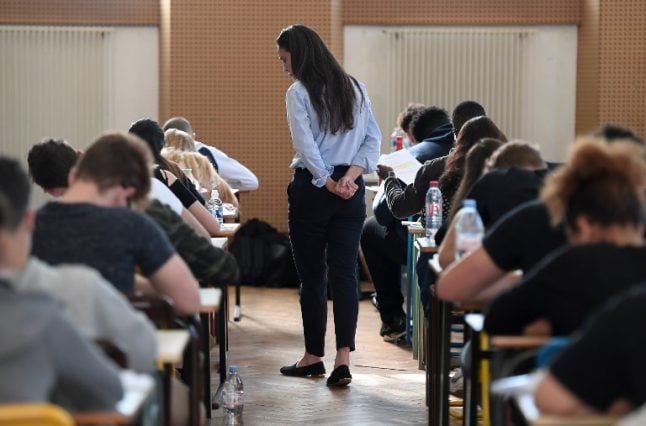 Photo: AFP
In 2019, 2,650 jobs in education are set to be scrapped including hundreds of teaching posts and administrative roles, France's Education Minister France's Education Minister Jean-Michel Blanquer announced in the French press.
The announcement was greeted with shock and anger by many who had presumed that education was a priority for President Emmanuel Macron.
They presumed the president's landmark reform to cut primary class sizes in disadvantaged areas would mean more teachers, not less.
Who will be affected?
The job cuts will not only affect teachers but also those in administrative roles in the country's education system, according to the minister.
Of the positions set to be axed “at least 400” are administrative positions such as school nurses and doctors and secretaries.
Only secondary schools and colleges will be affected primary schools won't be touched by the cuts. Photo: AFP
Why are the cuts being made?
Essentially the cuts are part of the government's plan to reduce the number of public service workers. While Macron made an election promise of cutting 120,000 public service workers over five years in reality things won't be so dramatic.
Earlier this month the PM Edouard Philippe announced there would be 4,500 posts cut in 2019 and another 10,000 in 2020.
And the teaching profession won't be spared these cuts as Monday's announcement showed.
The fact the job cuts will only impact secondary schools and administrative posts also shows how Macron is favouring primary school education, were his reform to cut class size to 12 pupils in certain areas and certain year groups puts a strain on budgets.
Will there be any benefits for employees at all?
Education minister Blanquer says the budget for the Education Ministry will actually increase by €850 million next year and teachers will benefit.
The government will aim to pay teachers €1,000 more a year when they first start teaching.
Blanquer wants to increase the spending power of teachers to make the profession more attractive. Part of this will be through more paid overtime to make up for the job cuts (see below).
Will class sizes be bigger?
The government says class sizes will remain the same.
However not everyone is buying it, with Valérie Sipahimalani, deputy secretary general of education union Snes-Fsu, saying the job cuts will increase the numbers per class.
“Because of the population increase, colleges expect an additional 32,000 students in September 2019 with some classes already made up of 30 students.
“With fewer teachers, their learning conditions will inevitably deteriorate,” she said. Photo: AFP
Will teachers be expected to work longer hours?
Well, it's not good news for any secondary school teachers reading this because the short answer is, yes.
To offset the job cuts, Jean-Michel Blanquer wants to ask teachers to do more overtime in the classroom and even plans to change the status of teachers to compel them to work two extra hours instead of one if necessary.
“Overtime will be exempt from the normal salary contributions so will be more rewarding for teachers,” Blanquer said.
Philippe Vincent, Secretary General of the school headteachers' union (SNPDEN), said: “Some teachers are already doing a lot of overtime in high school and I doubt they can do more.”
Will there be more cuts in future?
If French President Emmanuel Macron fulfills his promise to axe 120,000 positions across the civil service during the current five-year presidential term, it looks like there could be more cuts to come in the next few years.
In August, Prime Minister Edouard Philippe announced that 4,500 posts would be abolished in the state civil service in 2019 and more than 10,000 in 2020.
“The following years may be even more painful in terms of job cuts,” said spokesperson for the SE-Unsa union Stéphane Crochet.
“Moreover, it is a very bad signal sent to young people who intended to go into the teaching profession. Because some may give up over fears that there will be no job for them at the end of training.”
What else did the unions have to say?
Unsurprisingly, the unions are united in their disappointment over the news.
“National education has so far remained a priority and we can see that it no longer is,” Frédérique Rolet of the Snes-FSU secondary education union told Franceinfo. “We're going to have fewer teachers and more students.”
Five words to learn