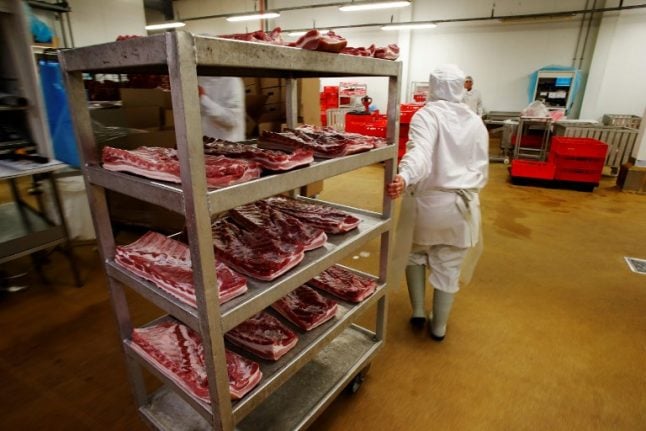 Illustration photo: AFP
“We expect this trial to recognise the extreme suffering of these animals because regulations were not followed,” said Brigitte Gothiere of the L214 animal rights group.
The group, whose name refers to a 1976 legal clause establishing that animals are “sentient beings”, was behind the posting of secretly-recorded video footage in March 2016 at the slaughterhouse in Mauleon-Licharre.
The images include employees bleeding a sheep while it shows signs of consciousness and a lamb being butchered alive.
It followed similar videos posted by L214 at two other abattoirs and prompted a parliamentary inquiry as well as a series of inspections at sites across France.
Three employees as well as the company's director, now retired, have been charged with animal mistreatment and not following regulations such as ensuring the animals have been fully stunned before being killed.
A fourth employee is charged only with violating the rules.
But for Gothiere, “this trial will be the occasion to demonstrate the responsibilities of the state and the veterinary services”.
An employee from another abattoir filmed by her group was given an eight-month suspended prison sentence in April 2017.
Similar videos from other countries in recent years have raised pressure on lawmakers to impose stricter oversight on slaughterhouses accused of unnecessary cruelty in order to maximise profits.
French animal rights advocates including the actress Brigitte Bardot have called for surveillance cameras to be installed in slaughterhouses.
But the measure is unlikely to be included in a new law being debated in parliament on food and agriculture, which calls for tougher punishments in case of cruelty at abattoirs or in animal transport, and a mandatory animal welfare chief at each establishment.