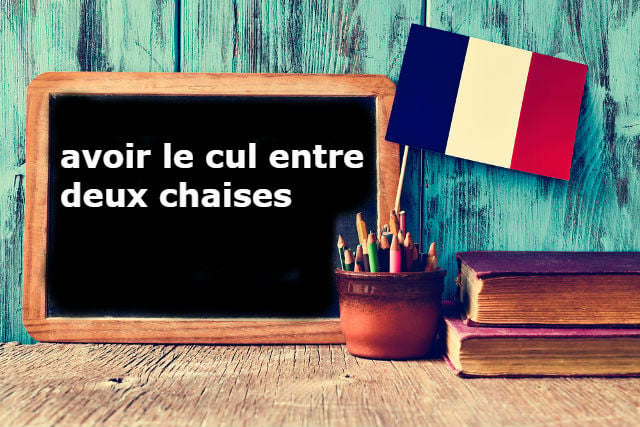 Why have we chosen this expression?

Because it’s useful. It’s informal. You certainly won’t learn it at school. But you’ll almost certainly make use of it if you are in France because we all have “le cul entre deux chaises” on a regular basis.

It can refer to that uncomfortable feeling of indecision we are often afflicted by where we simply can’t decide which of the two options to go with (or in this case chairs to sit on) and end up in that awkward place between the two.

So for example you could say j’ai le cul entre deux chaisses if you were torn between which of two jobs to apply for.

It can also refer to being stuck in an unsatisfactory position between two sides so for example if you are struggling to juggle studying and working and the result is that you are succeeding at neither then you can say j’ai le cul entre deux chaises.

When do we use it?

As you might have guessed it’s an informal expression to be used in familiar surroundings rather than in a job interview or with your mother-in-law.

It’s normally spoken rather than written although as these headlines below show, some news sites aren’t afraid to to use it even in relation to the president.

What to do when you are caught between two stools?

The expression “assis entre deux chaises” literally means sitting between two chairs, but can be used for “sitting on the fence”.