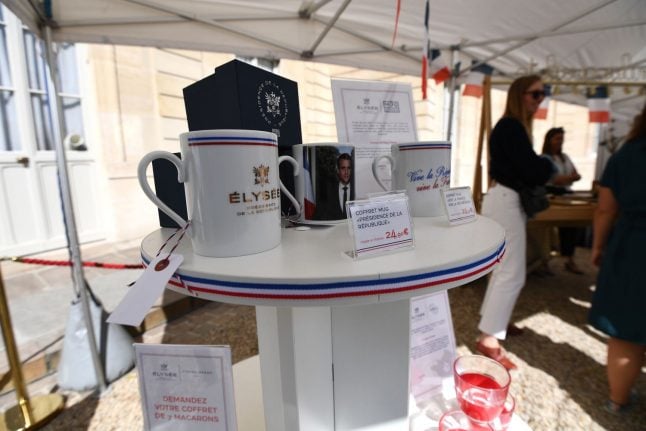 Items on sale in the grounds of the Elysee Palace, the official residence of the French President, on September 15, 2018, in Paris. Photo: Anne-Chritine Poujoulat/AFP.

The mugs, which were to be sold at the palace shop, were not made in Limoges and most likely not even in France, according to experts.

The branding faux pas piqued the ire of porcelain potters in Limoges in the central Haute-Vienne region who make some of the most expensive ceramics in the world.

Alain Mouly, who heads the union of Limoges porcelain workers, said he was alerted to the problem at a meeting in late August.

“I asked the audience who made these products and they all laughed. It has been a very long time since any potter here has made porcelain mugs,” he told AFP.

“The product has become too dear, it doesn't sell and doesn't fit the profile of Limoges porcelain. Most of these mugs are now made in Asia.”

Limoges was built on porcelain, with production starting after 1768 when it was found to be a rich source of white kaolin clay, transforming the area into a major producer.

But since December, only pottery which has been entirely made and decorated in the Haute-Vienne can carry the 'Limoges porcelain' stamp after the region was awarded the status of a protected geographical indication (IGP).

Although the mock mugs were actually decorated in France, that was done in the southern city of Toulouse, Mouly said.

“It's ridiculous. The state lets you have this geographical indication but it can't even control the products that it ends up buying itself!” he said.

He said they had destroyed the offending products and sent 300 other French porcelain mugs to the palace — without saying where they were made.