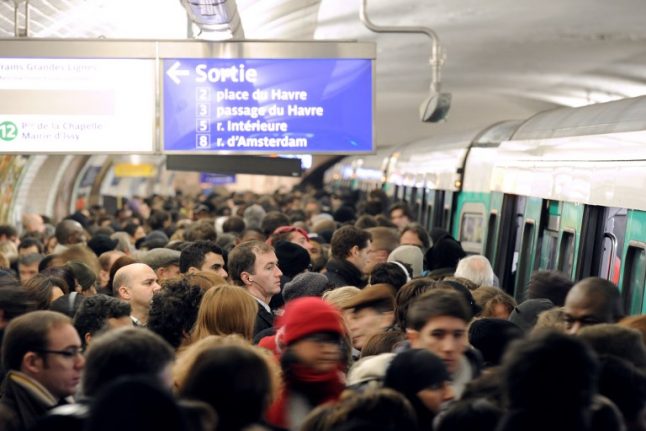 Even though the black sheep of the Paris Metro family has seen its position in the punctuality tables rise over the past eight years, it’s still notoriously cramped and uncomfortable for passengers.

Line 13 is after all the busiest line on the Parisian underground network, taking 650,000 travellers daily across the city, 60 percent north and 40 percent south.

Transport authorities for the greater Paris region of Île-de-France and Paris itself insist they recognise passengers' pain and have vowed to take steps until a real remedy can be found.

That remedy won't come until at least 2020 when the extension of line 14 from St Lazare to the town hall in Saint-Ouen will finally be complete.

This is expected to result in a drop of 25 percent in passenger numbers on line 13, which might allow some people to actually find a seat.

In the meantime passengers in Line 13 will have to make do with minor changes which we have listed below. Paris transport authority RATP will be launching a new cleanliness reporting system which they say will see Line 13’s cleaning staff get notified faster of any mess that has to be cleaned up on the carriages or platforms.

For every folding seat removed from Line 13’s carriages, there will be an extra 14 percent of space available for a passenger.

By having more people standing it will also mean there are less disputes over space when some passengers choose to sit in overcrowded carriages, and getting in and off the carriages will also be easier and faster.

Boost services on the 528 bus route

In order to try to relieve overcrowding in the line more buses will be added to the 528 bus route that runs between St Lazare station and Porte de Clichy.

Paris Line 13 metro users will have to wait a few years before getting to rest their derrieres on brand-spanking new seats.

According to RATP, 66 new trains will replace the older the ones on the line in 2026. These will all be equipped with air conditioning, heating and a new door system.

And the reaction to the measures announced?

Officials with the Île-de-France region including its president Valerie Pécresse have come in for criticism after their announcements this week.

For a start Paris Mayor Anne Hidalgo said they had “absolutely not taken into account the difficulties encountered by travelers and the need to act.”

“The most urgent thing is not to remove the folding seats but to replace the rolling stock,” Hidalgo said.

And he announcements did not seem to go down well with users either, many of whom took to Twitter to express their disappointment that not more was being done.

Many mocked the move to install USB mobile phone charging stations on certain platforms in line 13.

One tweeter summed up the views saying: “Ridiculous. We do not care about USB charging points on the platforms! We just want to stop traveling like cattle without any dignity. Ashamed!”

Some users said authorities would be better off installing air conditioning on the trains rather than mobile phone charging stations.

So it appears that the extension of line 14 eventually opens the commuters of line 13 have another couple of miserable years ahead.