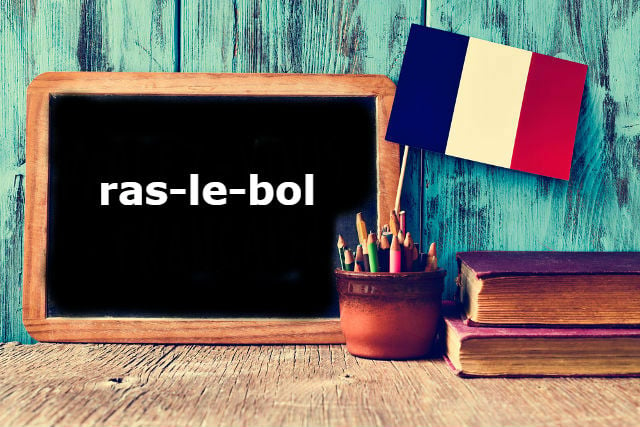 Photo: Deposit photos
Why have we chosen it?
This is one of those words which always pops up in headlines because it's suited to so many situations.
And it can trip up language learners because it is a word that you definitely won't learn in school despite the fact that it is used all the time in France. What does it mean?
This delightful little word means something along the lines of gloominess, despondency, despair, bleakness, “fed-upness” or discontent in general.
It is most often used as part of the phrase “en avoir ras-le-bol” which when put into the first person form would be: “j'en ai ras-le-bol”.
That literally means “my bowl is full” and even though this might seem like it could be a good thing, it actually means “I've had enough”.
This expression, which is an informal one, can be used to express everything from general discontent to extreme frustration depending on the context.
The French often talk about the “ras-le-bol fiscal” (tax malaise) to refer to their all round fed-upness with having to pay so many taxes.
Origin
It is disputed where “ras-le-bol” come from although some sources claim that has very vulgar origins
Apparently “bol” used to be slang for “ass” so if you said “j'en ai ras-le-bol” it literally meant that you needed to relieve yourself (to put it politely) and so it seemed a natural fit for it to figuratively mean you were fed up or frustrated.
Examples
Here are translations of the examples in the newspaper above:
1. Drome, Ardeche: ras-le-bol des moustiques!
Drome, Ardeche: fed up with mosquitos!
2. “C'est le ras-le-bol general!”: tout un service de police se met en arrêt maladie pour protester
“Everyone is despondent“: A whole police department goes on sick leave to protest
And some more examples:
3. Après l'augmentation des impôts, du prix de l'essence et du gaz, il y a eu une sorte de ras-le-bol général.
Following the increases in taxes and the prices of petrol and gas, there was a kind of general despondency.
4. J'en ai ras-le-bol de l'école!
I'm fed up of school!
(The above two examples are from wordreference.com)
READ ALSO: