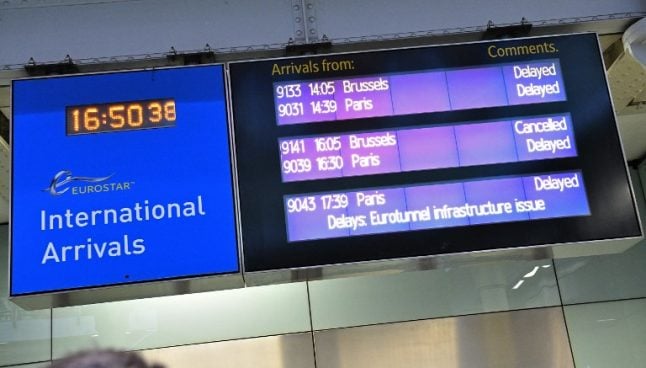 Earlier in the summer, July 8th to be exact, a friend who was travelling back to London sent me a picture (see below) of the situation at the Eurostar terminal at Gare du Nord.

“Queues at Gare du Nord are horrendous. They go all around the building and up the stairs. God knows if i'm going to be able to get the train,” he said. There had been similar scenes the previous day on Saturday July 7th when an “operational problem” caused chaos at Gare du Nord.

On July 1st “thousands of confused passengers” were left waiting for hours in the heat at Gare du Nord while one mother complained that the “Eurostar was no longe ra family experience” after her family was split between two different carriages.

In fact a quick scroll through Twitter suggests there have been many days this summer when, for whatever reason, there have been chaotic scenes at Eurostar terminals on both sides of the Channel.

Come on @Eurostar sort out the queues for departures at Disneyland Paris Over an hour in the corridor in this heat. Kids dehidrated no info, REALLY POOR!!! @eurostar #eurostar #customerservice??? pic.twitter.com/y3XKE0wCM0

@Eurostar queue into the parking garage of @StPancrasInt no staff outside the station letting anyone know what's going on. Will everyone make their train…who knows #eurostar

@Eurostar big mess today at St Pancreas ! But I guess this was predictable that a Friday end of July would be busy !! Any idea of when train 9028 will eventually leave ?!!! No information shared expect being pushed back and pushed back #eurostar #disapointed #delay #goingbakhome

Of course not all of the problems that prompted these tweets from disgruntled customers will have been Eurostar's fault, with the heatwave, storms and recent electrical or technical faults in the Paris area all having impacted services. As have French rail strikes.

But the problem for Eurostar is that some passengers, myself included, just don't seem to trust or enjoy the service like they did in the past.

Alasdair King who describes himself a “regular Eurostar user since the service opened” said: “The general level of service does seem to have been in a state of decline for years; late running trains, late seat allocation changes, a feeling of organised chaos, particularly at Paris Gare du Nord and tickets getting more expensive.

“When I travel now, I expect there to be problems and I never used to. I don't know why it's got worse but it definitely feels like there is less pride in the whole experience.”

A reader of The Local named Chris had this to say: “I have been a Carte Blanche (frequent traveller) member several times, for a long time using them for a weekly return trip to London. There were very rarely any problems. Since the new trains have arrived and the new concourse was built at Paris Nord they just don't seem to be able to cope. “I have gone back to flying until they sort themselves out. I don't know what the issue is. Every day there seems to be boarding problems and cancellations. Following their Twitter page shows how angry they are making their customers.”

Other frequent visitors to Paris told me recently of how the days of turning up at Gare du Nord or St Pancras half an hour before the train leaves are over and they too are actually considering flying, which for many would have been unthinkable for a London to Paris trip, so convenient has the Eurostar service been in the past.

On one of my own recent trips on the service we were told only as we checked in that our train would not be stopping at Ashford International as planned and we would have to go into London and then get a train back out to Ashford. It seems this is a common occurrence.

I also recently flew from Paris to London for the first time in years with budget airline easyJet, simply because the Eurostar tickets had become so expensive.

Even when Eurostar isn't hit by external problems whether it be power cuts or strikes, the queues to get through check in and then two sets of passport controls (English and French border control) can still be horrendous on an ordinary day.

@Eurostar queue into the parking garage of @StPancrasInt no staff outside the station letting anyone know what's going on. Will everyone make their train…who knows #eurostar

Eurostar will often send passengers a text message advising them to get the terminals at least an hour before their train is scheduled to leave meaning passengers now have more of a similar experience to those who travel through airports, in other words more standing in queues and waiting around.

And then there's the cancellations and delays that appear to be much more frequent these days although Eurostar says it does not publish data on this so we can't be certain if there is more disruption to services than there used to be.

But again a scroll through Eurostar's Twitter feed gives a clue as too how often the services have been disrupted recently.

Train 9113 07.56 from Brussels and the 9152 18.04 from London have been cancelled for Monday 16th July 2018 due to technical issues, for which we apologise. Please follow this link https://t.co/PqhQzwt5eh to change your booking or claim a refund.

All other trains are currently planned to run with delays.

Part of the problem, judging by Eurostar's own figures is simply that there are far more people taking the cross-Channel trains than in previous years. As a whole the numbers have more than doubled since it was launched in 1994. In 2017 there was a three percent increase in passenger numbers compared to 2016 with some 10.3 million people crossing the Channel by train. That equated to a €57.6 million profit.

That record looks likely to be broken again with the first quarter of 2018 seeing a record number of travellers take the service.

It seems that the sheer number of passengers has outgrown the capacity of both Paris and London terminals, which is why both feel so overcrowded these days.

Eurostar themselves admit they have had a tough summer.

“The start of the summer period has been a very busy time for us, with travellers making their way to Europe at the start of the holidays,” a spokesman told The Local.

“We are aware that this has resulted in longer queues than normal at our stations, and as such we are managing the flows of passengers very carefully, and have brought in additional support to help the team over the busy summer period. Colleagues from across the business are also supporting the team at peak times to help assist passengers.”

As for queues at passport controls, which one frequent passenger says have got worse at Gare du Nord since the introduction of biometric passport gates (e-gates), Eurostar says “the additional checks introduced by the European Council last year have increased the amount of time it takes for the border authorities to carry out these checks.” The Home Office in the UK told The Local that: “Border Force are meeting their 25 minute service-level agreement 100 percent of the time in Paris, and this includes the recent peak periods.”

Border Force added that it has deployed e-gates in Paris which in the last 12 months have processed over 1.2 million passengers.

“Recent weeks have seen a change in the passenger mix (similar to other UK ports) meaning there are more non-EEA passengers being presented to our controls who need to see an officer.

“We work with Eurostar to ensure we have sufficient resources available to meet demand and to ensure that Eurostar actively manage passenger flows to our controls effectively.”

The Eurostar, when it runs on time and the prices of tickets are reasonable is still a great service enjoyed by so many passengers that unlike airports takes you from city centre to city centre, but it no longer feels like the obvious choice over flying.

Have your say on the Eurostar: Do you feel the service has deteriorated in recent years?