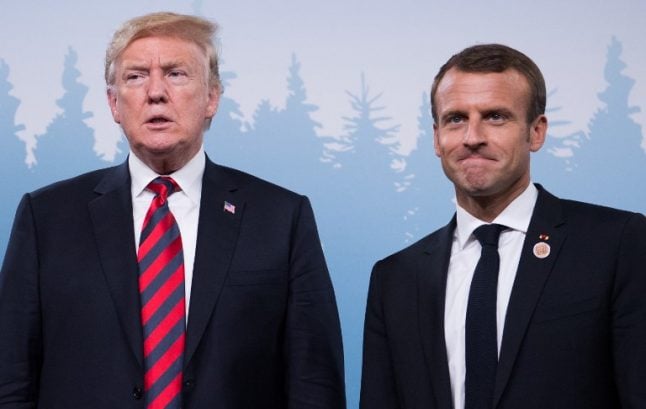 Photo: AFP
Just 44 percent said the US was a “trusted ally” under President Donald Trump — a 33 point plunge since the same survey was done in May 2014, when Barack Obama was in the White House.
Only 17 percent said they had a positive opinion of Trump in the Ifop poll, commissioned by the American Jewish Committee advocacy group, France's Foundation for Political Innovation and the Sursaut think-tank collective.
Some 54 percent said they had a “very bad opinion” of the Republican leader.
Supporters of the far-right National Rally party led by Marine Le Pen — formerly the National Front — were the only group to express a more positive opinion, with 42 percent backing Trump.
Despite warm ties dating back to the American Revolutionary War in the 18th century and their alliance in World War II, US policy has long been a source of criticism in France, not least since the conflict in Iraq.
As Trump pursues punitive trade tariffs, 78 percent believe the US is bad for French growth.
And with Trump's decision to pull out of the Paris climate change agreement, 88 percent also see his country as an adversary in the fight against global warming.
The figures do however point to a slight improvement in opinions since Trump's victory in November 2016, when just 38 percent considered the US a trusted ally.
Attitudes also vary between age groups, with the oldest French nationals holding the most pessimistic views of the US.
Only 38 percent of those over 65 see Washington as a trusted ally, compared to 52 percent of those aged 18 to 24.
The survey questioned 1,007 people online on September 10 and 11.