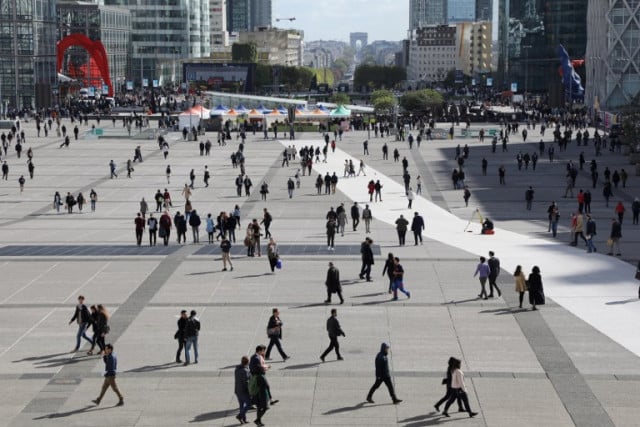 While France might attract a huge number of people who come to these shores to put their feet up at the end of long and stressful careers, most foreigners who come here are actually of working age.

Which means they need to find work.

But perhaps unsurprisingly many of them find it difficult, indeed more difficult than foreigners do in other countries.

A survey by InterNations global community, which interviewed 18,000 respondents around the world found that 55 percent of expats in France found it hard to apply for a job.

That's compared to the average of 36 percent around the globe.

There were other stats as well that revealed how foreigners found it hard to get work in France. For example 47 percent said they were happy with their career prospects in France compared to 55 percent globally.

That score saw France ranked 52nd out of 68 countries for career prospects.

READ ALSO: The 10-point checklist – What you have to do to land that job in France “It seems to be generally hard to apply for a job in France,” InterNations wrote, quoting one foreigner who said: “The process of getting your papers and finding a job is very complicated.”

The survey did not go into detail about the possible reasons for why foreigners found it hard to land a job in France but did quote one expat who simply said: “The job market is awful”.

Another reason alluded to and one that regular comes up as a topic of discussion among foreigners is the difficulty in getting qualifications recognized which may hold people back.

Some 44 percent of newly-arrived foreigners in France found this to be an issue compared to 52 percent globally.

In France, having your diploma/s recognised by French authorities could be essential depending on your situation and your plans for life in France but French bureaucracy is renowned for being fairly complex and tedious.

In France, the legal principle of academic or professional equivalence with other countries does not exist.

That means that if you're a foreigner looking to work or study in France, your prospective employer or educational institution may require a certificate of comparability for your qualification, a document that makes it as transparent as possible for them to understand it in a French context.

This might the reason many find the process of getting their qualifications recognized a real headache.

READ ALSO: How to get your foreign qualifications recognized in France Another factor is clearly the language.

Unless they are looking for bar work, au pair jobs or English teaching positions then finding a job without a competent level of French will be difficult.

That's the case even in Paris, although many new start ups in the French capital use English as their office language given the number of international staff.

But that's only a recent change and Paris is not like other European capitals such as Amsterdam, Berlin or Stockholm where the locals will have a high level pf proficiency.

Remember the French are regularly ranked the worst in Europe at speaking English and although things are improving the upshot is you'll need to speak French for most jobs and many foreigners simply don't have a good level.

That's not to say it's not impossible to find work if you don't speak French. There are many jobs out there for those who haven't mastered the language of Moliere, Depardieu and Mbappé.

READ ALSO: The jobs in France where you don't really need to speak French As for the jobs market that the expats complained about, well there's no doubt it's not as fluid as in other countries and unemployment is still stubbornly high – hovering just over 9 percent and over 20 percent for young people.

Again things are slowly changing and reforms have been passed in recent years aimed at making it easier for French companies to hire and fire staff but in general there is not as much movement in the French jobs market as you'd find in Britain, for example.

When people land permanent contracts known as CDIs they tend to hold on to them because it might harder to get another one. And a without a CDI in France it's still hard to get an apartment or a loan.

Most contracts handed out by companies are still temporary contracts (CDDs) which might not prove tempting for people moving to France from abroad and keen to get settled. Although in reality starting with a CDD temporary job is what most people do in France.

So the bureaucracy, the still-rigid jobs market, high unemployment and the need for French language will no doubt make it harder for foreigners to find work in France than in some other countries.

And it's obviously harder for some nationalities more than ever. Americans for example will have a great deal more trouble finding legal work in France than EU nationals given the visa requirements.

Although British nationals may soon find themselves in the same boat depending on what happens with the fraught Brexit negotiations over the coming months.

READ ALSO: What Americans can do to find work in France

But are there are other reasons why expats foreigners and immigrants find it hard to land a job in France? Please share your views and experiences in the comments section below.