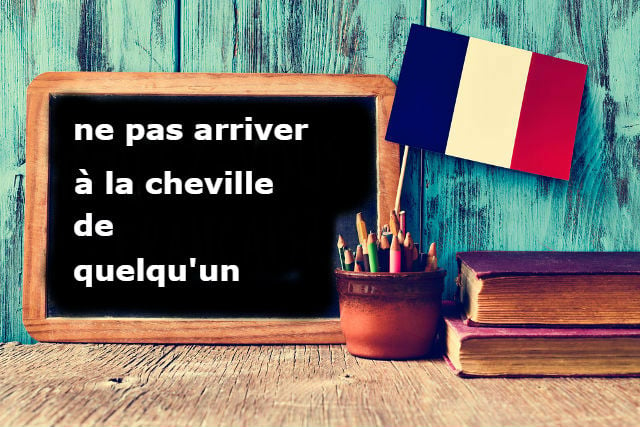 Why have we chosen the expression?

We noticed the expression in a news headline this week (see pic below) that was discussing an opinion poll that compared the popularity of the current leader of the centre right Republicans party compared to ex-president Nicolas Sarkozy, who remains a popular figure on the right.

The expression literally means that a person does not come close to someone's ankles.

This expression is used to compare two people in a pejorative way – saying they don't come up to their ankles infers they are very inferior to the other person. So the real meaning of the headline above is that a survey revealed that people did not like Wauquiez nearly as much as Sarkozy.

There is another similar expression in French with the exact same meaning is “Il ne lui arrive pas à la ceinture” (he doesn't come close to his belt).

In English we would say that a person cannot “hold a candle to someone”. So poor old Laurent Wauquiez is just not in the same league as old Sarko.

Although this expression is thought to date back to the 18th century, it is commonly used in everyday written and spoken French.

This dancer is very good, but he's not anywhere as good as Michael Jackson.

One year after the launch of this new product, the competition is still nowhere near as good.

Why do I need to know rodéo ?

Because they are becoming more common in certain parts of France, so you’ll likely hear about them, but if you’re expecting cowboys the you’re likely to be disappointed.

Rodéo – roughly pronounced roe-day-oh – is a French word that is formally defined as the assembling or herding of a group of young animals.

This is probably the definition you are most familiar with, or perhaps you associate the word with the American and Mexican sporting events that involve large arenas and activities like lassoing young cows, riding bulls or broncos, or attempting to restrain a steer.

However, in practice, the more common French usage of the word “rodéo” would be one that is more correctly defined as a “rodéo urbain.”

These are illegal street races that take place either between motorcycles or cars on public roads, sometimes also known as a rodéo sauvage – unlicenced race.

Les rodéos have become a focus of French law enforcement in recent years, due to the increasing popularity of these races in working-class neighbourhoods across the country. Punishable by one year’s imprisonment and a fine of up to 15,000, the French government instituted new laws to “reinforce the fight against rodéos” in 2018.

They are particularly controversial due to their loudness and for how dangerous they are, and they’re also the subject of an award-winning French film called simply Rodeo (using the English spelling), in which the director used real rodéo riders to perform the stunts.