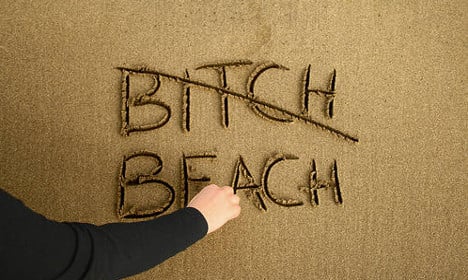 Photo: AFP
The French often rank very low when compared to other EU countries in terms of their English-speaking capabilities.
Hence the French government's new plan to improve the English ability of French youngsters which involves more lessons in English at primary school and allowing kids to watch cartoons in English.
So what do they need to do to climb the league table even further and reach the dizzy heights of their Scandinavian cousins, who typically top the rankings?
Here's what the experts say needs to be done for the French to improve their English (that's only if they want to of course, we don't want to force anyone here…)
Prioritise English in schools
Clearly the French are capable of learning English to as high a standard as their European neighbours, the problem Kate Bell from Education First, an international company that specialises in language training, explained to BFM TV is that the subject isn't prioritised in schools.
“It's not a question of ability: the French can learn English very well. But there are other countries which have prioritised learning this language [English] earlier and as a result have taken the lead ahead of France,” said Kate Bell from Education First.
“There are two cultural reasons for this: firstly there is a tendency to prioritise maths and science and students who are weak at languages are not frowned upon.
Jean-Luc Breton, Secretary General of the Association of Modern Language Teachers (APLV), who is an English teacher himself said teachers should be checked for their ability.
“In primary school, you have to check the competence of the teachers, and in high school, you have to have languages included in the diploma because the students don't feel motivated,” he told BFM TV
“Above all, and this is what we have insisted, there should be more hours [dedicated to English] in high school. Limiting the lessons to two and half hours or two hours seems very insufficient to us. A lot of studies seem to show that three hours is really the minimum necessary to make progress.”
But there are signs things are changing.
In a few days, Chantal Manes, General Inspector of English and journalist Alex Taylor, who have been investigating how the teaching of foreign languages can be improved in France, will present their findings to France's Education Minister.
READ ALSO: Separate learning English and Anglo-saxon culture
Education First's Kate Bell makes the point that perhaps one of the longstanding resistances to really prioritising the learning of English in France is the ongoing battle to withstand the growing invasion of English words into the French language and indeed of Anglo-Saxon culture in general over French culture.
But Bell says the French need to separate the two.
The French need to see there's  difference between learning English as a purely professional tool that will help their careers and Anglo culture in general, she says.
In other words mastering English doesn't mean they have to watch American films and listen to British music instead.
Stop dubbing movies and TV
France could really learn from the Nordics – a region that is consistently at the top of the rankings – when it comes to leaving films to their original languages.
“In France it's only been in the last three or four years that you have even had the option to change TV shows and movies to the original version,” said Nenad Djokic, France's Country Manager at Education First told The Local. Photo: Screenshot/Youtube
Adding English subtitles to English TV shows could take things even further, said Stephen Wragg, the managing director of the French-based Business and Technical Languages (BTL) school.
“The problem with French subtitles is that people just end up reading them, they don't listen and learn from the spoken words. Netflix is leading the way by offering an English subtitle option,” he tells The Local.
“Language requires repetition. If this means you have to watch your favourite series three times, then buckle down and do it.”
Have some confidence in themselves
Most French people are better English speakers than they give themselves credit for, Wragg added.
“Many people have excellent English, but they've acquired a timidity, a reticence to use it,” he said. “The French have a lack of confidence, they're afraid of making mistakes, afraid of expressing themselves.”
In all classes in school there is rarely an emphasis on encouraging pupils to speak out.
He said that if he could wave a magic wand and take away the self confidence issues, people would jump ahead half a level on the European Common Framework, which ranks speakers from A1 to C1.
“It's only by practicing what you've learned that you can learn more.”
The French should follow the example of their president.
For the fist time, France's leader President Emmanuel Macron, with his fluent English, is setting an excellent example for the French.
Frequently giving speeches and interviews in perfect English (see video below), the young leader has made himself the darling of the English-speaking media.
Previously French presidents seemed shy of speaking the language of diplomacy and were often mocked by their own public for their poor levels of English.
But with Macron, that's all changed… and the rest of the French people should follow the example of their confident president.
Stop le mocking
Linked to the problem of a lack of confidence is French people's tendency to ridicule each other's level of English – and it’s got to stop!
Whether they are sensitive about their accent or just too scared to really give it a go, the last thing a French English learner needs is to be mocked, but it happens a lot. Photo: ZaraMuzafarova/Depositphotos
“The fear of being ridiculed, of making a mistake, and being told off by the teacher is rooted in the psyche of most young French people. So just imagine how it feels when we have to do it in English,” said French student Lea Surugue.
“Being mocked for having a strong accent in English is a fear most teenagers cannot shake off in their language classes and that doesn't disappear into adulthood.”
Stop clinging on to French
“The French still nurture their language when it comes to the arts and culture,” said Peter Gumbel, a Paris-based author of a best-selling critique of the French school system.
“There's a whole policy of 'francophonie'. If you use an English word in a billboard ad, you have to put an asterisk and translate it. The Academie Française thinks English is worse than the plague, and still tries to eradicate it where it can.”
A perfect example is its attempts to find French words for tech innovations, like hashtag. Or indeed like smiley, start up, and chat.
“In France, the media and the government don't even use the word 'English'. They just use the phrase 'foreign languages' when they're talking about learning languages,” said Djokic from Education First.
Most believe that if the French are to improve in English, they have to embrace it rather than send out the message that it's a dirty influence that needs to be cleansed. Photo: AFP
Make teaching more relevant
Education author Gumbel compares learning in France to a chore and not a pleasure.
“Like all subjects in French schools, languages including English are taught in a way that is heavy on theory (ie grammar), light on practical application and not much fun,” he said.
“Teachers should focus classroom activity far more on conversation, and less on verb tenses.”
Basically learning English has to become fun.
Stephen Wragg from BTL agreed, adding that his 14-year-old bilingual son recently fell victim to the system.
“This is a boy who is totally bilingual and had just returned from a year in the UK. When he got his English test results back from his French school, he got just 12 out of 20. In Spanish he got 13 out of 20, and he couldn't even order a drink in Spain.”
English professor at HEC, Adam Jones, adds that learning can be fun at home too.
“Students are incredibly lucky when it comes to online resources as the best films and TV series are anglophone (same goes for music),” he said.
Be proud of your accent
Someone needs to get the message through to the French that their accent is a plus point and it shouldn't hold them back.
“You can't imagine how many times I've told people that people are attracted to French accents,” said Wragg.
“In the UK, they use French actors to sell luxury products. The accent is seen as sexy and exotic, something positive.”
So come on France, don't hesitate to charm us! French actor Audrey Tautou. Photo: AFP
Go abroad more
Author Gumbel thinks that the Eurostar between Paris and London has done wonders over the 20 years since its launch.
“In 20 years' time, many more French will speak much better English,” he says.
Wragg from BTL adds that parents need to continue the trend of sending their kids abroad for a year.
“They realize they need to learn English, and quickly. They won't get fed if they can't ask for food,” he says.
“Travelling is so important. If a French person goes abroad, he or she will improve quickly and won't feel so embarrassed by their accent, said Adeline Prevost from Education First. “They won't be in class, ridiculed by other French students, but alone in a foreign country, with the impossibility to avoid speaking to natives,” she said.
This article is an updated version of a previous article on the same topic published in 2016.