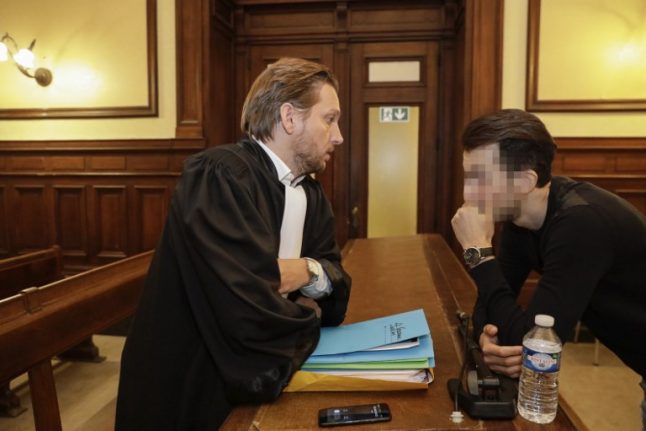 Lawyer Yannick De Vlaemynck and Mohamed Abdeslam talk during a session of the Brussels correctional court on September 10. Photo: AFP
Mohamed Abdeslam was tried in a Belgian court for aggravated robbery alongside two alleged accomplices over an incident that took place on January 23 in Brussels.
Abdeslam and the co-defendants were accused of stealing 68,000 euros ($79,000) of public money belonging to the gritty district of Molenbeek that was never recovered.
“It was staged, a piece of theatre where everyone had their role, and it was out of the question to hurt anyone,” said the star defendant.
But one co-defendant, a city employee identified as Pierre-Raphael C., claimed to be a victim of the heist and denied the robbery was fake.
The events took place in broad daylight when Pierre-Raphaël C. and another employee — who has not been charged — were seemingly attacked as they emerged from a car to deposit cash bags at a bank.
Abdeslam is accused of driving the getaway car which belonged to the alleged attacker and co-defendant Youssef B., who denied any involvement.
The court proceedings revealed that Mohamed Abdeslam, whose only income was unemployment benefits, needed money for a project to open a shisha bar in
Brussels.
Abdeslam, who faces a 15-year jail sentence, is a former employee of the Molenbeek district, but was fired after the deadly attacks in Paris.
In addition to Salah, another brother, Brahim, died as a suicide bomber in the deadly events of November 2015 in Paris.
The trial is set to resume on September 19.