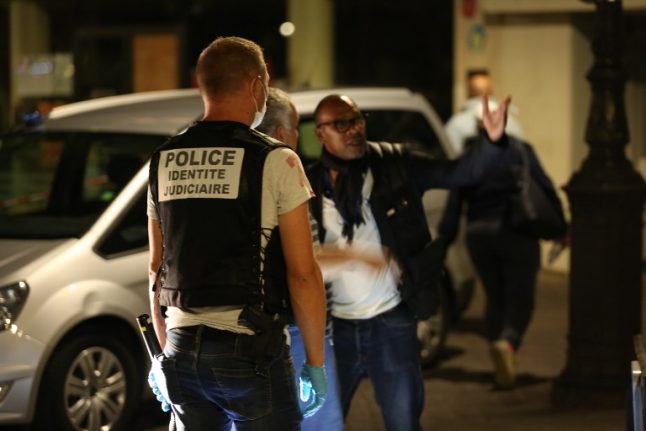 French police on the scene where a man attacked and injured people with a knife in the 19th arrondissement of Paris. Photo: AFP
What happened?
A man who was reportedly running with a knife about 25-30 cm (10-11 inches) long injured seven people including two British tourists on the banks of the Bassin de la Villette in the 19th arrondissement of the French capital.
Four of the victims are in a critical condition, police have announced.
The terrifying attack saw bystanders trying to stop the assailant by throwing petanque balls at him.
“There were around 20 people chasing him. They started throwing petanque balls at him,” eyewitness Youssef Najah (28) said, referring to the sport popular in France also known as boules.
READ ALSO: “Around four or five balls hit him in the head, but they weren't able to stop him,” he added.
The suspect is believed to be an Afghan national and has been arrested, said a source close to the enquiry, adding he had targeted “strangers” but that “nothing at this stage shows signs of a terrorist nature”.

This was right outside our office. No sign it's terror related yet… Not really a touristy area but hugely popular with young Parisians on warm days. Can feel a bit dodgy late at night due to number of drug dealers and crack addicts… https://t.co/39cP4JnZLa via @TheLocalFrance Photo: AFP
“That troubled him. I managed to jump on him, and put him on the ground. I managed to make him drop his knife and once I was on him, he was neutralized.”
“It was a reaction, I do not know why I did that. When you're in a group you can do something,” he said, adding that he does not see himself as a hero.
The police arrived three minutes later, according to Smaïn, who added that the assailant did not say anything even when he was caught.
“Some people asked him, why did you do that? But he did not answer. Even at the time of the attack, he did not say a word. He looked drugged.”
According to Smaïn's description the attacker was around 1.65 metres tall, not very strong and no more than 65 kilos.
What's it like in the area where the attack happened?
The area by Bassin de la Villette is not particularly touristy however it is popular with Parisians on sunny days and warm evenings.
The neighbourhood has seen rising gentrification in recent years with a growing number of trendy bars and restaurants populating the streets near this part of the canal, as well as outdoor swimming pools in summer.
Parisians gather around the less touristy part of the canal to play petanque and other games, as well as for picnics and apero.

This is the area where the knife attack in which seven people including two British tourists were injured took place last night – right outside our office. No sign of police this morning but French news teams are in place.
https://t.co/7SonRudnVi pic.twitter.com/cFw8hy8KHQ

There are also two cinemas on opposite sides of the canal.
However there is another side to the area, which has proven to be a magnet for migrants and refugees and the location of huge squalid camps, the most recent of which was cleared in May.
Many refugees continue to congregate in the area, some to take part in English lessons given at the canal and others to get a warm meal served by charities.
The area is also very popular with drug addicts.
What do we know about the British victims?
According to reports in the French press, one of the British tourists has a chest injury while the other was stabbed in the head.
Smain, who was one of the main people who helped stop the attacker, said that it was women's screams that alerted him to what was going on as he had at a drink at the nearby cafe.
“He began to run, I grabbed my chair to hit him but he went to the other side of the road,” he told the French press. “We started running after him with the young people throwing petanque balls.
The witness went on to describe how it was at this point that he crossed the path of two Englishmen.
“The young people shouted “Watch out! Knife!” but the English did not understand what they were screaming… and he stabbed them,” he said, adding that he hopes that the two people will survive.
What is the UK doing?
The British embassy in Paris told The Local: “Our consular staff are assisting two British people who have been hospitalised in Paris, and are in contact with French medical staff who are treating them.”
The UK foreign office said it was aware of reports of the attack and was “urgently investigating this incident” in cooperation with French authorities, British media reported. Photo: AFP
Was it terrorism?
Police have said that so far there is nothing to indicate that the incident was terrorism-related.
Is there a rise in knife attacks?
A police investigation has been launched for attempted murder, according to a judicial source.
It is the latest of several knife attacks France has seen in recent months, with terrorism being ruled out in most cases.
On August 23, a man stabbed his mother and sister to death and seriously injured another person in a town near Paris before being shot dead by police.
The motive for the violence remained unclear despite a claim by the Islamic State (IS) group that it was an attack by one of its fighters responding to the terror organisation's propaganda.
Authorities said the 36-year-old had serious mental health problems and had been on a terror watch list since 2016.
That attack came days after an Afghan asylum-seeker was arrested in town of Perigueux for a drunken rampage with a knife in which four people were wounded, one seriously.
Police said investigators had “very quickly” dismissed a terrorist motive after the August 13 incident.
And on June 17, two people were hurt in another southern town when a woman shouting “Allahu akbar” (God is greatest) attacked them in a supermarket with a boxcutter knife.
France has been on high alert following a string of jihadist attacks in recent years, often by people who have become radicalised or claim to have acted in the name of the IS group.
More than 240 people have been killed by Islamist extremists since a massacre at the Charlie Hebdo satirical magazine in Paris in January 2015.