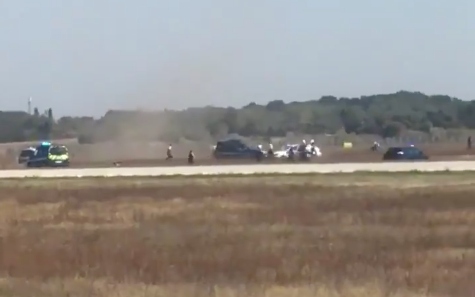 Up to twenty police cars and motorbikes, a helicopter and dozens of officers were deployed on Monday morning at Lyon Saint-Exupéry airport in eastern France after a man managed to break through the security perimeter and drive his car onto the runway.

Passengers waiting to board their flights watched in shock and filmed the scene on their mobile phones as the grey Mercedes was chased down by authorities.

Some of this footage shows the driver struggling to keep hold of the vehicle as he raced through the grassy area around the tarmacked taxiing lanes.

The man is then seen almost crashing into an embankment and then fleeing on foot as he is eventually swarmed by police, despite his best efforts to outrun them.

Auvergne-Rhône-Alpes police proceeded to arrest the man but have not yet disclosed what he is being charged with. Nobody was reported injured at the scene.

According to local daily Lyon Capitale, a witness described how the man in question crashed through a glass barrier in Saint-Exupéry’s Terminal One.

Another eyewitness told BFM TV how he saw the car “drive through an automatic gate at the terminal, making a deafening sound in the process”.

A source close to the investigation is quoted as saying by Le Parisien that the suspect was driving at high-speed in the opposite direction on the highway before reaching the airport.

Flights have been halted at the major French airport.

Several flights are diverting because of the incident at Lyon Airport pic.twitter.com/JWgV131M9Z