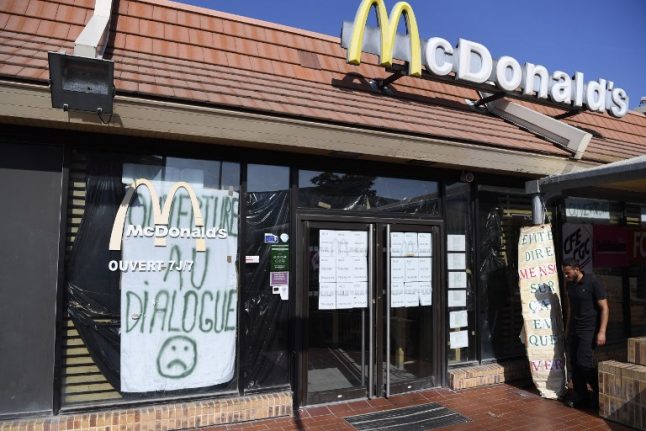 Photo: CHRISTOPHE SIMON / AFP
Residents had joined a months-long campaign to halt the site's sale by its owner, who says the outlet — the second-biggest employer in the Saint-Barthelemy suburb — is losing money.
“We won, we won!” dozens of the 77 employees at the “McDo, as it is known in France, shouted after learning of the court's decision from their lawyer. Staffers claim the restaurant is a key part of community life in a country that has traditionally looked down on the American takeaway franchise.
The court halted the sale to a proposed buyer whose project it deemed unviable because he had “no experience in the food sector” and insufficent financing.
“I have fireworks exploding inside me, I'm so happy for them,” one local, 45-year-old mother Samira, told AFP as tears rolled down her cheeks. She said her family often came to eat at the site, “especially when the school cafeteria workers are on strike — McDo is basically our private cafeteria.”
READ ALSO: The fight to save a McDonald's in France
The restaurant is one of few businesses which haven't closed up shop in the neighbourhood, home to a large Muslim population and some of the Mediterranean port city's poorest housing estates.
With unemployment at nearly 30 percent in the area, drug-dealing has flourished, providing more lucrative, and dangerous, opportunities for many.
Employees said their McDonald's had become the heart of the community, offering internships and jobs to people while providing a safe space for birthdays or meeting friends.
The site's sale was part of a plan by franchise operator, Jean-Pierre Brochiero, to sell six restaurants in Marseille. The court allowed the sale of the other five to go through.
Brochiero did not immediately respond to the ruling, and employees may not have secured a total reprieve.
Another buyer may be sought, or McDonald's France, which owns the building and land as well as half of the franchise operation, may simply decide to close the site.
Url copied to clipboard!