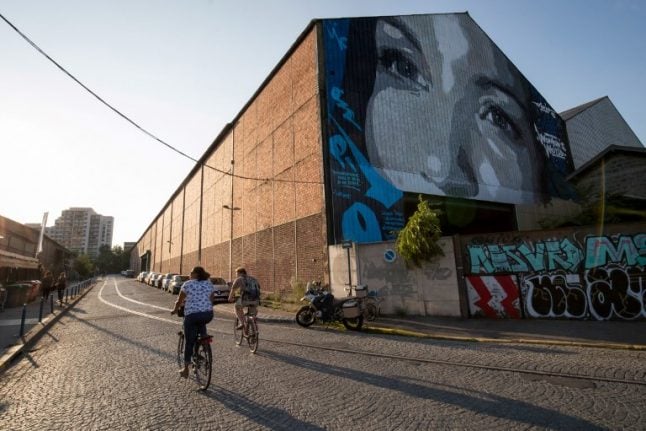 People cycle past a portrait of French boxer Sarah Ourahmoune by the street artist Marko 93, painted on the wall of the Halle Pouchard, a former industrial wasteland housing the "Grandes Serres de Pan
Better known for concrete high-rises home to poor immigrants and France's highest crime rate, Seine-Saint-Denis is now welcoming flocks of Parisians to hipster oases that are bringing a welcome injection of cash and energy.
When they set up in the northern suburb more than a decade ago, Soukmachines, a collective of young event planners, initially “had to clear what resembled a rubbish dump”, recalls Anne-Sophie Levet.
These days she is deputy head of La Halle Papin, a vast pop-up arts space in the solidly working-class neighbourhood of Quatre Chemins.
In 2016, the local town hall had offered Soukmachines a year's use of the unoccupied tyre and tool factory for a dirt-cheap rent, on condition that they breathed new life into it. People enjoy a drink and have a chat at an open-air cafe at the Grandes Serres de Pantin, a former industrial wasteland in Pantin. Photo: AFP
One year was extended to three, and now it is a thriving hub of artists' studios and shops with a busy programme of concerts and cultural events, a paddling pool and self-service barbecues.
“There are jewellers, fashion designers, welders,” says Franck Cardinal, an artist and architect who works on site.
“It's a chance to meet other people who do different work, and enrich what we all produce here.”
Changing stereotypes
Some 20,000 people visited last year, many of them Parisians — for whom the ring-road around the capital has traditionally marked a psychological barrier.
“These are now places for strolling and for tourists to visit in greater Paris, for Parisians looking for a bit of space, and places to party,” says the region's Socialist head Stephane Troussel.
Paris is far from the first city to turn unwanted land into an edgy arts hub: similar projects have found success all over Europe, from the shipyards of Amsterdam's NDSM to RAW in Berlin, an unused train repair depot.
Around 80 plots of wasteland have been given makeovers in Paris and the surrounding region.
But local officials are proud that more than a third are in Seine-Saint-Denis — unloved areas turned into cultural spaces, community centres or even urban farms. Grandes Serres de Pantin. Photo: AFP
Regeneration
The region north of Paris boomed after World War II, drawing thousands of labourers from France's North African colonies to its chemical factories, metalworks and other industrial sites.
But deindustrialisation hit Seine-Saint-Denis hard from the 1960s onwards, emptying factories as the region's reputation shifted to one of crime and poverty.
Today, a third of residents live below the poverty line, although authorities hope a massive infrastructure project dubbed “Grand Paris” will aid regeneration by enticing commuters to the suburb by 2025.
In the meantime, while some may complain of a hipster influx, officials see projects like La Halle Papin as a showcase for the potential of “the 93”, as Seine-Saint-Denis is known after its postcode.
Similar projects include the Cite Fertile, a former freight train depot now offering organic food and beach volleyball, as well as Station E, a forthcoming “village” of shipping containers which will be powered by green energy.
“We have an area full of enterprising young people and abandoned spaces,” said Mireille Alphonse, deputy mayor of the Seine-Saint-Denis town of Montreuil.
She is also deputy chief of Est Ensemble (“East Together”), a group of gentrifying Seine-Saint-Denis communities which for the past three years has systematically put out tenders for people to run plots of unused land.
“We decided to help them so that our towns don't just become dormitories for Paris,” she said, adding that the group was following a model used successfully in Britain and Germany.
Renaud Chateaugiron, operations manager at a new temporary open-air cafe by the canal in Pantin, just north of the Paris border, said the project might struggle to find a new site once its permit runs out in two summers' time.
“Make no bones about it, before long there won't be any unoccupied land left in Seine-Saint-Denis,” he predicted. 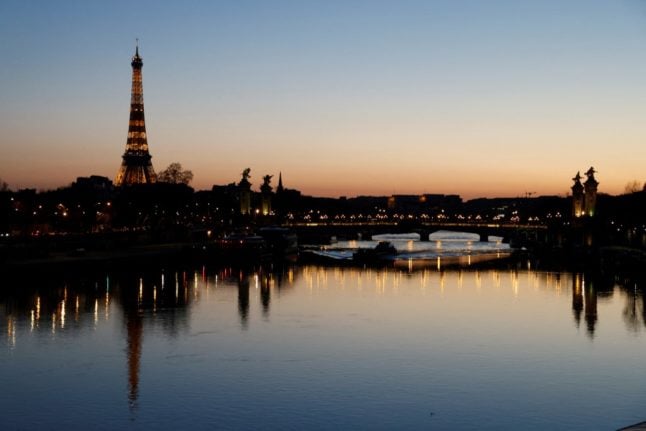