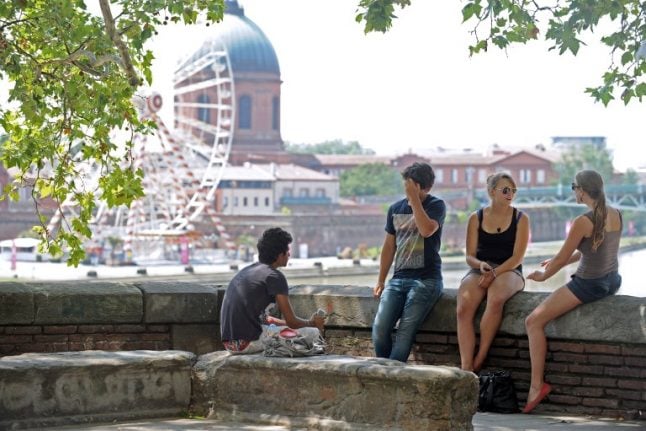 In joint place at the top of the annual league table by L'Etudiant magazine came the perennial favourites Toulouse in the south west and Lyon in central France, which also topped the previous years rankings.

In all, some 44 cities were included in the ranking including Paris and smaller student cities such as Limoges, Amiens and Reims.

The French capital was ranked down in eighth place behind the top two, as well as Montpellier in third place followed by Rennes, Grenoble, Bordeaux and Nantes.

Strasbourg and Lille took the last two places in the top 10.

STUDENTS sign up for half price membership of The Local France Down at the bottom of the ranking came the town of Pointe-a-Pitre in Guadaloupe, which finished just below two northern towns of Valenciennes and Douia-Lens.

Among the 15 criteria that formed part of the ranking were public transport, hours of sunshine, air quality, museums on offer, and the average price of renting a studio.

READ ALSO: What are the most expensive cities in France to be a student? Given that it's hard to compare being a student in France's biggest cities like Lyon and Bordeaux to the smaller towns the study also divided the places into three different league tables.

So while Lyon and Toulouse topped the overall chart and the ranking for France's biggest cities, the town of Angers topped the league of middle-sized student cities followed by Poitiers and Dijon.

The table for the smaller sized cities was topped by the Atlantic coast port town of La Rochelle, followed by Chambery in the south east and Pau in the south west.

So what's so special about Lyon and Toulouse?

Lyon scored highly in the categories of student life due to the “cultural offerings” including theatres and cinemas and employment because of the fairly low rate of unemployment (7.9 percent).

L'Etudiant magazine also complemented Lyon on the services on offer to students. It recommends they visit www.lyoncampus.info for anyone who has questions about life as a student in the city.

The site contains “advice and practical information to help students settle in”. It also recommends students visit the Maison des Etudiants on the campus by the banks of the Rhône river so they can immerse themselves in student life. And when it comes to culture Lyon is attractive for students not least because because of the famous Festival of Lights in December but also the discounts and reduced-price cultural passes for events throughout the year such as the cinema festival and the electronic music festival Nuits Sonores.

As for Toulouse it was the quality of teaching that pushed it up the rankings. It also scored highly for the city's transport network as well as level of employment and the dynamism of the job sector in the city and surrounding area.

The results of student questionnaires showed Toulouse proved popular for quality of life, atmosphere and dynamism.

In third place Montpellier on the Mediterranean coast was let down by the fairly high rate of unemployment – 11.7 percent but scored highly for the quality of teaching and training.

Its high score for transport and the long hours of sunshine also helped push it up the rankings into third place. That explains why student questionnaires saw it score highly for the quality of life.

When it came to the questionnaires and the opinions of the students in the city's themselves the overall ranking was slightly different.

Toulouse once again topped the chart with 99 percent of those surveyed giving it the thumbs up, which was the same score given by students in Angers and Strasbourg.

Rennes, Nantes and Lille all had a high level of recommendation (98 percent) while the central city of Clermont-Ferrand scored 97 percent, as did Tours. (Students at the Sorbonne in Paris. AFP)

Towards the bottom of the rankings was Paris where only 82 percent of students gave it the seal of approval. That score put it alongside Saint-Etienne and Poitiers although slightly ahead of Amiens (81 percent) and Pau (80 percent) which propped up the table.

As you might expect, students marked Paris down in the category of “budget” with the cost of life in the City of Light long being a source of complaints among students.

It was also ranked down for “lodging”, with Paris proving to be the most expensive city when it comes to renting student accommodation.

On the plus side L'Etudiant did point out that “Paris dominates all the other student cities for the breadth and quality of its training opportunities, as well as by the extent of its cultural and sport options.*

Of course your choice for where to study in France will no doubt depend on personal preferences. Perhaps hours of sunlight and public transport are less important to you than the cultural offerings a city has to offer or how much it's going to cost you to cover the cost of accommodation.

That's why L'Etudiant is suggesting you create your own rankings based on your own personal criteria, which you can do by clicking HERE.