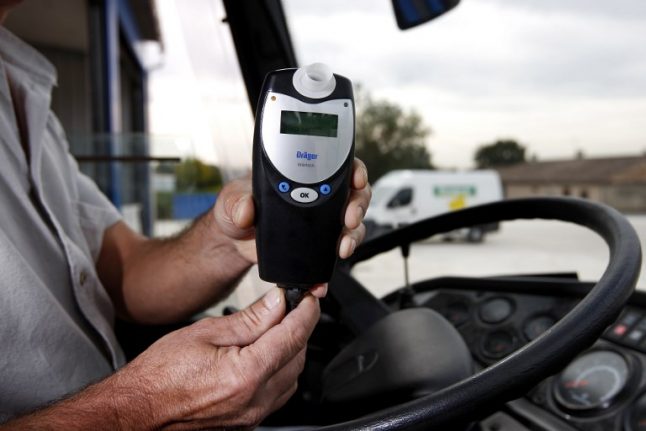 The breathalyser device which bus drivers must blow into to start their vehicle. Photo: AFP

Since 2015, all French coaches have been fitted with devices which prevent the vehicle from starting until the driver's breath has been tested for alcohol.

The devices require the driver's alcohol level to be below 0.2 grams per litre of blood in order for the vehicle to start.

A 51-year-old driver in the village of Bracieux in central France decided to skirt the rules on December 14, asking one of the boys onboard to blow into
the device in his place.

He didn't blow into it for long enough, so the driver asked the boy's older brother to have a go instead. This time it worked, and the coach took off.

The driver, whose first name was given as Dominique, claimed in court on Monday that he asked the boys to do it “as a joke” and that the motor was already running at the time.

“The two brothers are the son of a police officer and it was them who asked to blow into it — I didn't do anything wrong,” he said, insisting he hadn't
drunk a drop.

He was fined 370 euros ($430), however, after students said he had confessed to drinking two beers.

The children said he had driven so fast that one worried pupil had to ask him to take his foot off the gas.

One of the students said the GPS on their phone showed the coach was barrelling down the road at 107 kilometres (66 miles) per hour, which the driver denied.

The court heard that Dominique was also making liberal use of his horn and took his hands off the wheel to impress the children, which the defendant
again denied.

The children told their parents what had happened, leading swiftly to a police inquiry.

The driver was suspended from his job and later resigned.