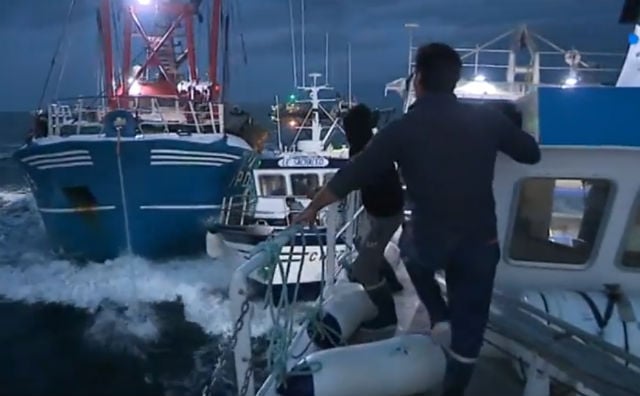 British and French fishermen reached an agreement Wednesday in the so-called Scallop Wars over fishing in the Channel, following clashes at sea between rival boats.

Tensions boiled over last week when five British vessels sparred with dozens of French boats in the sensitive Seine Bay, with video footage showing
fishermen from both sides ramming each other.

But following a day of talks in London, the two sides have reached agreement on the principles of a deal that should bring the hostilities to an end.

The clashes, which occurred around 12 nautical miles from the Normandy coastline, were the most serious in years of wrangling over the area's prized scallops.

“The UK and French fishing industries and governments held constructive talks today about scallop fishing in the eastern Channel including Baie de Seine,” the British and French governments said in a joint statement.

“An agreement on the principles of a deal has been reached,” they said.

French fishermen were incensed that British boats were accessing the highly productive waters, while their own government limited them to fishing there to between October and May to allow stocks to replenish.

Deals struck previously exempted British boats less than 15 metres (50 feet) long from the restrictions, a loophole French fishermen want to see closed and which led to deadlock in reaching an agreement earlier this year.

“The previous agreement involving the UK 15-metre-and-over fleet will be renewed,” the joint statement said.

“In addition, there is agreement in principle for UK under-15-metre vessels to be included in the deal.

“This is subject to a reasonable compensation package, the details of which will be defined in Paris on Friday.

“In the meantime, there is a voluntary agreement for all UK vessels to respect the French closure period in the Baie de Seine.”

Jim Portus, the chief executive of Britain's South Western Fish Producers Organisation, said the deal “satisfies the honour of fishermen on both sides”.

The agreement-in-process will prevent the smaller British ships taking advantage of the May to October window, but Portus said the talks will only be finalised if British fishermen are fully compensated.

“If it's not good enough on Friday, it will be rejected,” he said.

Asked if the French apologised, Portus said: “Regret was voiced before we started our negotiations.”

French industry representative Pascal Coquet said the result of the talks was a win-win situation.

“It's the best outcome for both sides because the British were within their rights.”

According to him, the agreement would stand for the 2018-2019 fishing season, while Portus told reporters it was in place for the rest of 2018 alone.

Ahead of Wednesday's gathering, Britain's Fisheries Minister George Eustice said renewing the deal limiting access would be “the right outcome”.

The skirmish led to France placing its navy on standby in the area, with Agriculture Minister Stephane Travert saying Tuesday it was “ready to intervene in case of clashes”.

Eustice, who discussed the situation with his French counterpart last week, said the two countries were in agreement on the issue.

“We haven't had further incidents since… they also recognise that under international law those (British) boats had a right to be there,” he added.

Mike Park, chief executive of the Scottish White Fish Producers Association, called demands for a blanket summer ban in the Seine Bay on all boats “a separate discussion” that the French were now making “a central issue”.