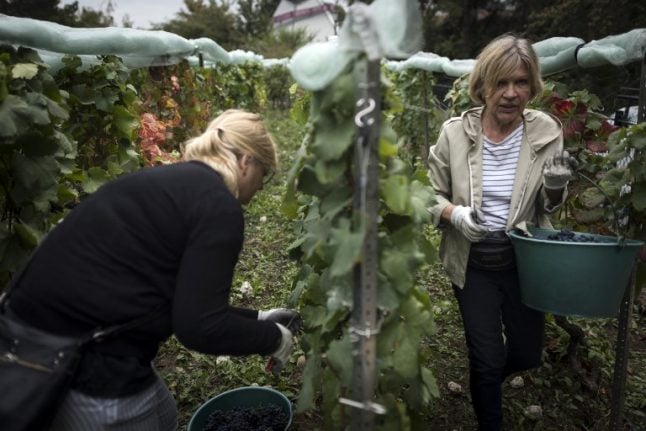 People pick grapes from the vineyards during the harvesting in the Georges Brassens' parc, in Paris, on September 4, 2018. Photo: AFP
Around 20 people armed with pruning shears snipped, picked and carried in the Parc Georges-Brassens in the south of the French capital on Tuesday after responding to a call from city authorities for volunteers.
The vineyard, which produced the equivalent of around 250 bottles of wine last year, is one of four in the French capital that offers locals the chance to take part in the great French tradition of grape harvesting without leaving the city.
“I had no idea you could do the harvest inside Paris,” 31-year-old Patrice Alokpo told AFP as joggers ran past the roughly 20 vines that were shorn of their grapes in a couple of hours.
“It's really great seeing some nature in the city.” Photo: AFP
Opening up the vineyards to the public fits a strategy from Paris authorities keen to promote green spaces and outdoor activities in a traffic-clogged city that is among the most densely populated in Europe.
Around 10 percent of the French capital is reserved for parks or gardens, official figures show, compared with around a third in London.
The park lies in a discreet residential corner of Paris that abuts the Perichaux housing estate, with its slab-like concrete apartment blocks, as well the eight-lane ring road.
Other vineyards in the City of Light are in the Bercy area to the east, the northeast Belleville quarter and the world-famous Montmartre hill in the north, where the vines are a tourist attraction.
“Our vines are less well known, but they are very prestigious,” said Marie Toubiana, who is charge of green spaces in the 15th district of Paris which hosts the park named for French crooner Georges Brassens.
She points to prizes for their red, which is organic and made from pinot noir grapes, in 2010 and 2011 in the annual wine competition for the greater Paris region. Photo: AFP
'Spoilt for choice'
Sylviane Leplatre, the chief wine maker for the city of Paris, would not be drawn on the capital's best vintage as she oversaw the first quality check on grapes emptied out in front of her on a table.
“You're spoilt for choice,” she said, explaining that there were whites, reds and roses that are only made available for sale to the public in limited quantities.
The Paris city hall stores much of the production and uses it for official functions, she said.
“Here we have a wine that is very fruity, light, and matured in barrels which gives it velvety tannins,” she said, adding that the 2018 harvest looked very promising after a wet spring and a long, hot summer.
French wine production is set to leap by 25 percent this year, government experts have predicted, in welcome news for vineyards after a disastrous cold snap in 2017 that hit output across the country. Photo: AFP
The quality of the grapes is also said to be high, leading to hopes that a truly vintage year to match 2009 could be in the offing.
Grape pickers are already out in the Champagne region as well as some areas of Burgundy in an early harvest that is increasingly becoming the norm because of global warming.
The 2017 production from the Clos des Morillons will be auctioned off for charity on September 29, while the 2018 grapes head for the presses and a year of maturation.
By AFP's Adam Plowright