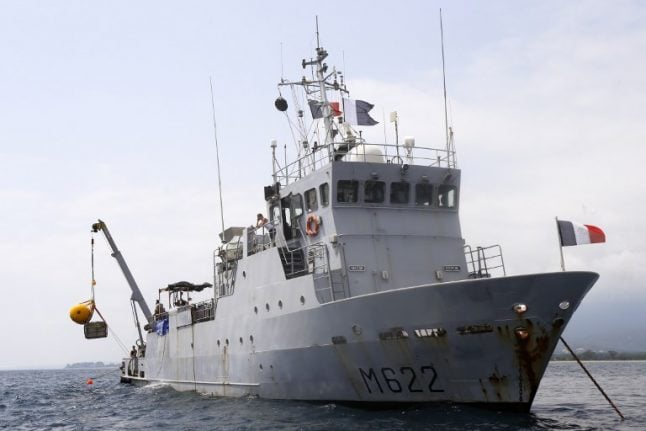 Authorities in France are keen to avoid a repeat of the recent clash between French and British boats off the coast of Normandy.

Around 45 French boats had surrounded 5 British vessels to try to prevent pillaging scallop (coquille saint-jacques) supplies. Stones and flares were thrown in the direction of the British boats, whose fishermen allegedly responded by ramming French vessels as they made their escape (see video below).

France's agriculture minister Stephane Travert, who last week warned British boats to steer clear of the contested scallop-rich waters, said on Tuesday that France's navy were on standby ready to intervene to keep the peace and prevent further clashes.

A patrol boat based in nearby Cherbourg is watching the area as part of a routine mission “to ensure the safety of people and ships at sea,” Captain Bertrand Dumoulin told AFP.

Travert said he could not speak for the British navy, whose ships are reportedly headed toward the area.

French fishermen are incensed that British scallop boats are accessing the fertile waters off the mouth of the river Seine — with French boats only allowed to fish there between October to May to protect stocks.

Travert said talks between the two sides planned for Wednesday must succeed.

The minister said there was a need “to find an agreement” to achieve “a sustainable and effective management of the resource in scallops”.

We will have to work, we can not continue in this situation, we can not have clashes like that,” he added.

Although Travert had asked the British fishermen to stay away from the contested area he accepted that they were doing nothing illegal given that the disputed patch is in international waters.

But he said Britain's upcoming exit from the European Union was adding to tensions.

“Most British fishermen are Brexiteers and we must recognize that tensions are being reignited as the United Kingdom's exit [from the EU] approaches,” added the French minister.

Travert insisted a global agreement must be found between the EU and the UK on fisheries and said the British fishermen should not expect a separate deal with France as the UK prepares to leave the European Union in March next year.

“We want a global accord, and do not want to see fishing treated separately, because fishing should not be a variable for adjusting Brexit,” he said.