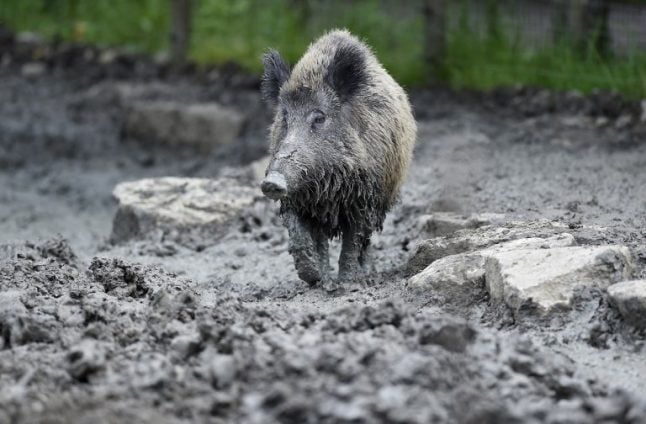 Photo: AFP
In recent months French farmers have grown furious over an explosion in France's population of wild boars, which has led to the animals running amok on their land.
But from September 6th, a committee set up by the French government, will be in place to help fight the problems faced by the country's farmers as a result of these wild animals.
The move comes just days after criticism was levelled at the government by the president of France's leading farmer's union the FNSEA, Christine Lambert.
“Today, 90 percent of agricultural damage caused by large game (wild boar but also stags and other deer) to crops and forests are concentrated on 15 percent of the national territory,” said the government, echoing the words of Lambert, adding that the level of damage “has become locally unbearable for agriculture and road safety.”
READ ALSO: Lambert believes that more hunting is needed to fight the problem.
“[There are] 700,000 boars killed [per year], but there are four million” in the country, said the boss of the FNSEA on Thursday, adding there is a need for “more hunters, less boars and less damage.”
Among the organisations represented on the committee will be the FNSEA, APCA (agricultural organisation), the National Federation of Hunters, the Federation of Private Foresters, the National Center of Forest ownership (CNPF) and the ONCFS (National Office for Hunting and Wildlife).
So far, one of the measures proposed is the management of hunting plans by departmental hunters' federations.
Farmers have made it clear that the wild boar problem is one that is growing.
“Every year it gets worse. They destroy everything,” French farmer Yves Rolland told AFP. “The boars come every night, in a pack. They nibble a little bit over here, a little bit over there, trampling on everything.”
“My father never saw boars when he was a farmer. Now we've been invaded,” he said.
Five French words to know
un sanglier – wild boar
le gibier – game/wild animals
le dégât – damage
le chasseur/la chasseuse – hunter
un agriculteur/une agricultrice – farmer