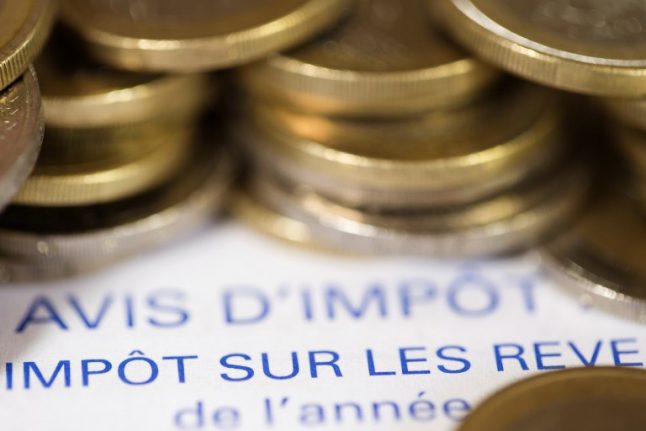 Photo: AFP
It's just four months until French workers are due to start paying their taxes directly from the income known in French as prelevement a la source..
But in spite of the fact that the date is fast approaching and the change has the backing of the French, with 60 percent in favour, according to recent poll — it seems it might be delayed again — or possibly even scrapped altogether.
Here's a look at the the new system which would affect 38 million households in France and why Macron might be experiencing cold feet so late in the game.
What is the change?
The way we pay our income tax in France is supposed to change from us paying it one year late (via a one-off payment or three or ten-monthly payments), to it being taken out of our pay automatically each month as we earn.
READ ALSO: Currently workers in France either don't pay their taxes on what they earned in 2017 until 2018, or, as most do, they pay estimated amounts, monthly or thrice-yearly, based on the previous years taxes.
But in future the money will be automatically deducted from our monthly salaries, in an employer based Pay-As-You-Earn (PAYE) as it is in most European countries. Employers and pension providers will have the job of deducting income tax.
This means that for most workers income tax goes from being an annual headache to just an extra line on your payslip, although the yearly tax declarations will still have to be made.
When is it supposed to be happening?
Well it was already meant to have happened by now. Taxing income at the source was a campaign promise by France's former president François Hollande. In March 2017, The Local reported how the previous government promised it would be in place by January 2018.
But then the arrival of Emmanuel Macron to the presidency delayed the implementation as the new government wanted time to make sure the reform was actually worth it and to smooth out any problems.
In 2018, budget minister Gerald Darmanin revealed the change will take place on January 1st 2019 – so a year later than planned. French President Emmanuel Macron (R) with Budget Minister Gerald Darmanin (L). Photo: AFP
Is Macron in favour of the change?
The president has previously seemed to be in favour of the change however on Thursday he said he was “quite” in favour of it, suggesting the landmark change could be postponed once again and perhaps even scrapped altogether.
Macron announced that he wanted some “precise responses” before deciding once and for all if  the change to income tax payments would be brought in in January.
“I have the intention to push this reform through on time but I have asked the relevant ministers to answer all the questions that still arise before giving a final directive,” said Macron.
“I need a series of very precise answers and to be sure of what our citizens will go through when this reform is introduced,” he added.
“It's normal that we make sure that all the details are clear. I want to see in detail what it means for each citizen.”
So, what is Macron worried about?
The reform is obviously complex but the government has grown particularly concerned about technical bugs that may impact the new system.
A report in Le Parisien on Saturday revealed that 350,000 errors were made in a recent round of testing which — if they continued once the new system was introduced — could see people paying far too much in taxes.
The two main technical bugs revealed in the report were tax payers appearing more than once in the system which would lead to them paying multiple times, an error which according to reports in the French press, the Ministry of Finance is denying, and problems related to tax payers with the same name.
The article also pointed out that businesses are not technologically prepared for the change, pointing out that employers would not have updated their payroll software in time for January 2019.
After the report was published, budget minister Gérald Darmanin tried to reassure people by tweeting: “The technology is working, it is ready!”
But it isn't only the technical side of things that seems to be worrying Macron — it's also the psychological impact on tax payers who will naturally see a drop in their monthly salary on their pay slips… something he naturally might not want associated with his presidency.
Some analysts in France have suggested that this psychological effect could have a big impact on the country's growth and this view has been reinforced even by politicians belonging to Macron's own party.
There may be the feeling of a loss of purchasing power, MP for Macron's La Republique en Marche, Cendra Motin told Le Parisien. Photo: AFP
But could it all just be a question of politics?
Some have argued that the possible backtracking over the reform is less a question of the government's fear over technical errors and more about the potential failure that attempting to introduce the biggest change to the country's income tax system ever seen, could mean.
“These technical bugs, which come from nowhere, are a convenient scapegoat to perhaps prepare people for backtracking,” former Budget Minister Jean-Francois Cope of the centre-right told Franceinfo.
Cope who believes the reform to be “very good” said that the tax administration is “perfectly able to put all this in place”.
And former Budget secretary of state, Christian Eckert, who launched the reform under Francois Hollande, told Liberation: “Technical problems? I do not believe it for a second.
“This whole story is nothing but politics.”
And it isn't only his political opponents lining up to criticise the president over his possible stalling.
General Secretary for the finance division of French labour union Forces Ouvrieres, Philippe Grasset told Europe 1: “There is no way the new system will start with hiccups and major bugs. To our knowledge it simply won't be the case.
“We have every confidence in our colleagues in the General Directorate of Public Finance (DGFIP) who have worked for two years on this.
“Now it's a political decision, and we're waiting for a political response,” he said. “We must stop beating around the bush, it is the government's procrastination that we are currently questioning, not the technical procedures at the DGFIP.”
And even some of his supporters have suggested Macron's possible cooling on the idea could be more about tactics than real worry… although they have naturally given it a more positive spin.
“Emmanuel Macron wants to show that he is not only preoccupied with geopolitics, that he is not locked in a tête-à-tête with Merkel or a fight with Putin and Trump, but that he is also concerned about the daily life of the French,” said one MP from Macron's La Republique en Marche party.
How much has the change cost France already?
So far France has spent €195 million on the new system which has mostly gone towards IT investment partly on adapting the tools necessary to calculate the rate that each worker needs to pay.
Some of the budget has also gone towards communications, funding TV spots and other media announcements to awareness of the change, as well as on extra staff for tax centres, with 40,000 agents trained to answer taxpayer questions.
What happens next?
Budget Minister Gérald Darmanin is due to meet with Emmanuel Macron and French Prime Minister Edouard Philippe to convince them that the technology  atleast, is ready for the change.
The French government has set September 15th as the date by which it must make a final decision which gives Darmanin 15 days to convince the head of state not to abandon the reform.
READ ALSO: