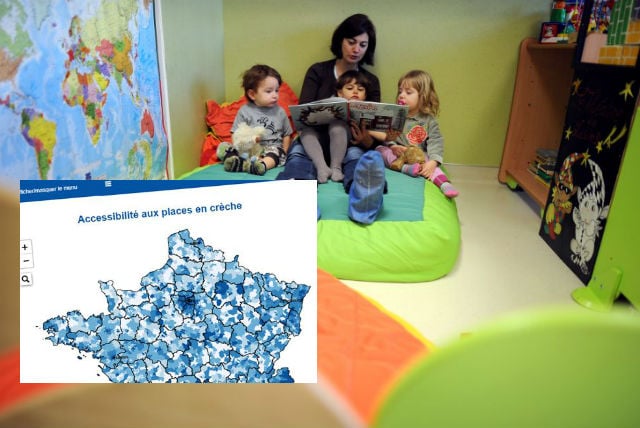 Any parent of young children in France will have experienced the stress of trying to get a place in a creche for a child or the worry over finding a childminder in time for the start of the new term (for more on this scroll down).

But a new study has revealed that the challenge of finding childcare is vastly different for parents depending on where they live in France.

That's because there are significant inequalities between municipalities and departments when it comes the number of available places in creche or the number of qualified childminders available.

The study by the government's Office of Research, Studies, Evaluation and Statistics (DREES) found that on average across the country there are 59 childcare places for every 100 children aged three or under, whether they be at a creche (kindergarten or nursery), pre-school, with a childminder or in home care, within 15 minutes of home.

But certain parts of the country are better off, notably Paris.

Parents in the capital might complain regularly about the battle to get a place in creche, especially in certain arrondissements but Paris has 78 childcare places for every 100 children.

There's the same number in the Loire-Atlantique department of western France.

But there are parts of the country where parents might struggle to find an appropriate option for childcare.

For example in Haute-Corse and Corse-du-Sud, the two departments of the island of Corsica there are only 28 and 29 places for formal childcare for every 100 children.

When it comes to creches or kindergartens there are only 18 places per 100 children on average nationwide although again there is a lack of égalité across the country.

But it's a different story in the northern department of Pas-de-Calais as well as in Aisne, Mayenne and the Sarthe, in central France all of which have less than eight places in creches per 100 children.

CLICK HERE for the interactive version of the map so you can check the level of availability in your area of the country. When there are so few places in nurseries the main other option for parents is to find a childminder or an “assistante maternelle”. The number of qualified childminders again varies depending on where you are in France.

The departments in the west of France were found to have more childminders available than elsewhere in the country.

“In rural departments, it is sometimes difficult to create structures and to have a steady number of children,” Johan Jousseaume, head of the education with the Confederation of Families told France Info.

“It's very expensive, there can be competition from private business crèches, and there are also many constraints, so some communities give up, hence the problems of childcare,” he continues.

The cost of setting up a creche is also a significant reason to explain why there are more places available in the bigger towns and cities than in rural France.

Essentially kindergartens need to be pretty much full to be economically viable, which might not be a risk if you set one up in Paris or Lyon but will certainly be in rural departments such as those mentioned above – Aisne, Mayenne and Sarthe, where there are the least number of places available.

The battle to get a place in creche

The Local's editor Ben McPartland explains how the battle to get a place in creche in Paris can push parents to go to great lengths.

Even though the above study reveals Paris has the most places in creche on offer per number of children in France, you wouldn't believe that if you have ever been through the process of trying to get one of the golden tickets.

Most parents are desperate for a place in creche mainly due to the fact they are generally cheaper than other forms of childcare such as childminders (assistantes maternelles) as well as more structured.

Such is the competition for places that parents will do all sorts of things to give themselves the best chance of getting a place for their toddler (Perhaps it's the same everywhere?).

And mums will begin their campaign when still pregnant.

READ ALSO: Ten lessons learned after having a baby in France One French website targeted towards mums tells them: “For parents, this obstacle course (of getting a place) is as difficult as getting a job and some of them do not hesitate to send a CV file with the picture of their child to stand out.

They will send Christmas cards to the creches with pictures of their babies with a message like, “Our son is really looking forward to being at your creche next September”. And if it's not Christmas they will just send a card anyway with a picture of their kid to try to ramp up the emotional pressure on the director of the creche.

Parents are urged to visit creches with their newborns to introduce them to those in charge and show them how cute and well behaved their children are.

I was urged to visit one with my daughter but the plan went awry when I was given a telling off by the woman in charge (directrice) for breaching strict security rules by walking straight in after a parent had left the door open.

Then parents will also send off their emotional letters or “CVs” to the Town Hall, where officials have the job of allocating the places in the municipal creches.

“Show them that this place in creche is essential for you to get back to work, your social life and to pay your bills,” they are advised.

After failing to get a place in creche for the first ballot I penned a letter in purposefully rubbish French stressing how important it was for me that our kids got a place in a creche so they could learn the French language and the values of liberté, égalité and fraternité given that English was the language spoken at home and the values we taught are incivilité, irritabilité and Yorkshire Tea.

It appeared to do the trick.

It felt a bit uncomfortable writing the lettre de motivation until you realise everyone else is doing it.

Part of the problem in Paris at least is that the allocation of places is shrouded in near secrecy and has been criticized for lacking transparency.

The Town Hall in each arrondissement appears to be in control of everything but then individual creches also seem to have a say in who gets a place at their establishment, although they will often say it's nothing to do with them.

What seems to complicate matters is that the cost of a place in creche depends on parents' income. So while some places are reserved for parents on low incomes others are given to high earners who pay more, which naturally helps cover the costs of running the creche.

Another factor that complicates things is that some creches are run by the local town hall (creche municipales), others are run by organisations (creche associatives) and then there are creches run by parents (creches parentales) while there are also private creches and ones run by businesses that may have extra places they need filling.

If you want to get your child in a creche run by the parents then you'll have to be prepared to dedicate some time each week to the creche. This might be with the kids or in an office role, looking after the accounts.

For some parents missing out on a place in creche feels like the end of the world. But it shouldn't be. Childminders can be a good alternative option if a little more expensive. But then then the quest to find the right childminder is a whole new stress.

Perhaps it's best just not to have kids?