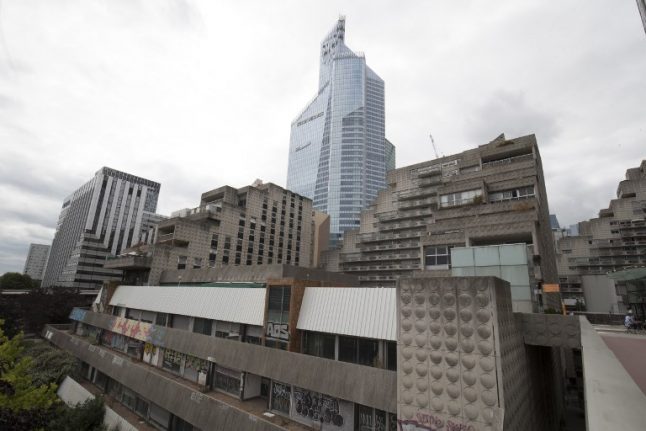 The Hermitage towers, two 320-metre (1050-foot) buildings proposed by a Russian property developer, are due to be completed by 2024 in the La Defense business district to coincide with the city's hosting of the Olympic games.

Designed by British architect Norman Foster, the towers will stand just four metres shorter than the Eiffel Tower (324m from base to tip) on a location currently occupied by a social housing block which was built in 1974.

But twelve of the 250 apartments in the Damiers block are still occupied, according to the landlord, holding up construction in a battle pitting them against developer Emin Iskenderov and his 2.8-billion-euro ($3.3 billion) project.

“I was a political refugee,” one defiant resident, anaesthetist Tatiana Dinulescu, told AFP as she recalled how she fled the former dictatorship in Romania. “It took time for us to build a new home, and now they're doing this. It's unacceptable.”

She has lived in the Damiers flats for more than 20 years. The struggle over the Hermitage towers comes amid a push to expand office space and residential sites in the Defense area, a centre of the French financial industry.

France is eager to attract banking jobs from London after Britain leaves the European Union, with lobby group Paris Europlace forecasting an estimated 3,500 finance and banking positions could cross the Channel to the French capital.

The Defense area west of the capital is the main high-rise zone of the French capital which has tight restrictions on tall buildings and a chronic shortage of space in its historic centre.

Future projects in the business district include “The Link”, a new 244-metre-high head office for French oil giant Total, as well as the 165-metre-high Saint-Gobain tower to house the eponymous French construction business.

Other construction projects, including six high-rise blocks in the capital's 12th arrondissement, have been announced to house the Paris region's growing population which is expected to hit 13.5 million by 2050, according to the French national institute for statistics Insee.

Tenants on the site of the future Hermitage towers have been fighting the current owner of the social housing block, Logis Transports, since 2007, but they are now under increasing pressure.

Four families had to leave their homes immediately and with no alternative accommodation when police and bailiffs came knocking on their doors at 6.30am on August 1.

“They treated us like criminals,” explains an evicted tenant who wanted to remain anonymous. Having refused offers of alternative accommodation, she said she was forced to leave her home immediately with her 19-year-old son after fighting for ten years to save her home. “I couldn't move a muscle without a cop on my back!” she said.

But the head of Logis Transports, Sylvie Vandenberghe, defended the actions of the company, saying that “the tenants have been offered numerous solutions.”

She explained that selling the Damiers flats will allow “the funding of 1,000 social housing residences, with 500 in the local area.”

Developer Iskenderov hopes to be able to set a start date for construction soon.

“We still aim to deliver the project by the start of 2024,” he said in a recent statement.

The Hermitage towers will sit on the edge of the river Seine next to four smaller new buildings.