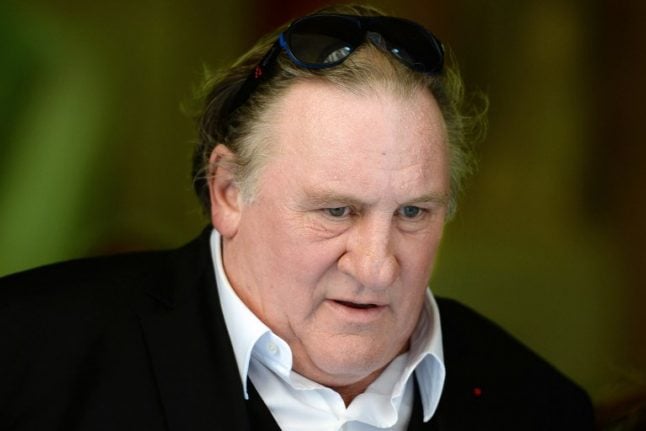 Gerard Depardieu issued a strong denial after it emerged he faces an inquiry into sexual assault allegations. Photo: AFP
Depardieu “absolutely denies any attack, any rape”, his lawyer Herve Temime said on his behalf, reacting to news that the Paris public prosecutor's office has opened a preliminary inquiry over alleged “rapes and sexual assaults”.
The probe follows a complaint lodged on Monday in southern Provence, according to a judicial source.
The complainant was “a young actress and dancer in her twenties”, the Parisian newspaper said, adding that she alleged the actor sexually abused her on the sidelines of a play rehearsal and at his home on August 7 and 13.
Depardieu, 69, is known as a larger-than-life character with a life-long penchant for making headlines.
The accusations against him are the latest in a string made against prominent men in the wake of the rape and assault claims against Hollywood mogul Harvey Weinstein and the Me Too movement that they gave rise to. French actor Gerard Depardieu (R) and French actress Catherine Deneuve. Photo: AFP
“I regret the public nature of this process which poses a major prejudice to Gerard Depardieu, whose innocence I am convinced will be recognised,” his lawyer Temime added, calling for restraint on all sides.
A prolific actor having made more than 180 films, Depardieu became the very face of French cinema due to roles in films such as “Cyrano de Bergerac” for which won best actor at the Cannes film festival and was nominated for an Oscar.
He made his name in the 1974 film “Going Places” after which he enjoyed a meteoric rise, demonstrating talent and allure in wide-ranging roles in classics, dramas and comedies alike.
Other notable Depardieu performances include roles in Francois Truffaut's “The Last Metro”, the Marcel Pagnol-inspired film “Jean de Florette”, “The Valley of Love” and four “Asterix and Obelix” films.
Fame and fortune
Once described by actress Brigitte Fossey as “both an ogre and a poet”, Depardieu worked under directors ranging from Bernardo Bertolucci, Andrzej Wajda, Jean-Luc Godard and Ridley Scott.
He has starred alongside actresses including Catherine Deneuve, Isabelle Adjani, Sophia Loren, Fanny Ardant and Kate Winslet.
His fame and fortune as a global cinema star starkly contrasted the hard, merciless world in which Depardieu grew up.
Born in 1948 to an illiterate alcoholic metal worker, he was the third of six children raised in extreme poverty.
In his 2014 autobiography “This Is How It Happened,” Depardieu said his mother told him as a child she had tried to abort him using knitting needles to avoid the expense of another baby. French actor Gerard Depardieu poses during a photocall for the second season of the French TV show “Marseille”. Photo: AFP
By his own account, Depardieu began running with bad company early on, hanging out with prostitutes before himself working as a rent boy. He committed a variety of crimes — including, he claimed, grave robbery — before landing in jail at 16 for stealing a car.
“At 20, the thug in me was alive and well,” Depardieu wrote.
Salvation came through acting, which Depardieu began in 1965 — purportedly after working as a beach boy at the Cannes festival — by attending the Theatre National Populaire in Paris.
In 2013 Depardieu sparked a huge outcry by leaving France and taking Russian nationality in protest at a proposed tax hike on the rich in his homeland.
Russian President Vladimir Putin treated him to a dinner to present him with his new citizenship and Depardieu was subsequently full of praise in an interview to Komsomolskaya Pravda daily.
READ ALSO: