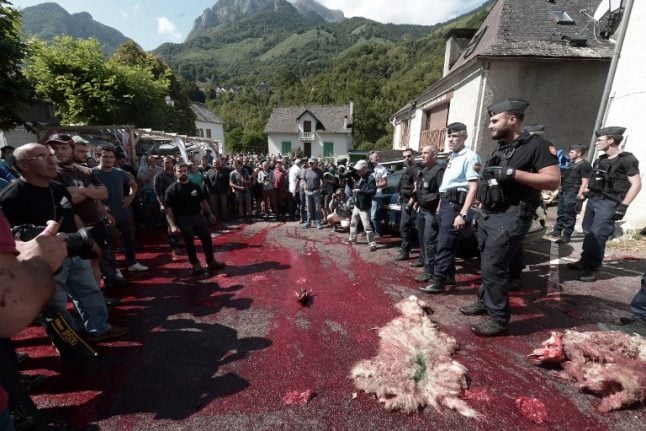 What on earth is happening in this small French village in the Pyrenees? Photo: AFP

The images were taken on Wednesday outside the small town hall in the village of Etsaut in the mountainous Pyrénées region of south west France.

The gendarmes are lined up in front of around 200 protesters, most of them local sheep farmers and local officials.

They were protesting against the planned introduction of two bears into the Pyrenees, which they say threatens their livelihood because the bears attack and kill their sheep.

The mayor of Etsaut, Elisabeth Medard, is apparently in favour of releasing the bears hence why her town hall was the scene of the bloody battle on Wednesday.

To make their point they threw sheep's carcasses and sacks of blood in front of the town hall as the protest briefly threatened to boil over.

The gendarmes and their cars as well as protesters and photographers from the local press were all left covered in sheeps' blood.

“This blood from our sheep flows because of these predators,” said one of the farmers. Earlier this year The Local reported how French farmers were furious over plans to release two bears into the countryside.

“Farmers are ready to do everything, even if it's illegal. They will not let this go,” warned Bernard Layre, head of the FDSEA farming union.

Echoing the battle over the wolves which roam parts of the Pyrenees and other mountainous areas of France, animal rights activists have passionately defended efforts to increase bear numbers while farmers say they are the ones bearing the costs.

According to an official count, livestock breeders lost 700 animals to bear attacks last year in the Ariege border area alone. Farmers put the figures at double this.

Hundreds of people joined a protest in the southwestern French city of Pau on April 30 against the arrival of the two new animals, wielding banners reading “You will not have the skin of the shepherds!”