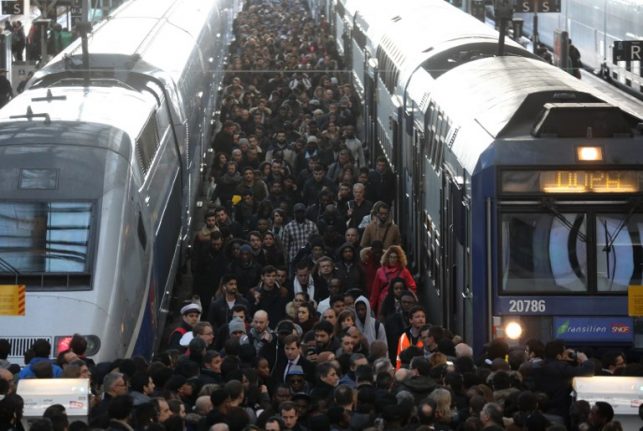 Commuters on the RER B in Paris. Photo: AFP
There's no doubt that living in Paris can be tough: commutes can be long (and busy) and the cost of living is high compared to elsewhere in France.
Those reasons go some way towards explaining why a whopping 84 percent of middle managers or execs – basically higher earners, known as “cadres” in France, want to ditch the capital for a less stressful existence in a different part of the country, according to a new survey by online French recruiters Cadremploi.
And they aren't planning on wasting any time, with 70 percent of them planning to do it in the next three years and 28 percent even considering leaving the region in the next 12 months.
The cost of living, which 77 percent of them consider too high, is the top complaint ahead of time spent commuting — more than an hour and a half daily for 49 percent of those surveyed, with 56 percent considering this excessive.
READ ALSO: A total of 54 percent complained about the lack of proximity to nature and 48 percent complained about the unappealing environment and housing problems, respectively.
Meanwhile 65 percent of them are looking for a better work/life balance.
Among the most dissatisfied are executives who live and work in the suburbs around the capital.
In total, 55 percent of these high earners are generally unsatisfied with their current lives in the capital.
So, where do they want to go?
Booming Bordeaux was well ahead of the pack with 58 percent of the executives surveyed dreaming of moving to the one-time “sleeping beauty” of the south west which has seen property prices surge in recent years, according to the survey which took into account the views of 1,786 candidates registered on the Cadremploi website.
READ ALSO: Insider's guide – All you need to know about life in Bordeaux Bordeaux. Photo: AFP
Hot on the heels of Bordeaux were Lyon and the Breton city of Nantes, followed by Toulouse and Montpellier.
The least desirable places for Parisians to move to were Metz in the eastern region of the Grand Est and Saint-Étienne in east-central France.
According to the survey, what these executives once considered desirable about life in Paris, such as the cultural scene, easy accessibility to services and interesting work are no longer enough to keep them in the French capital.
Unpleasant Parisians
And Parisians certainly didn't come out well in the survey.
A total of 94 percent of the “cadres” surveyed said that they found Parisians -(presumably they include themselves in this bracket) a stressed out bunch, with 61 percent of them saying they found them unpleasant and 60 percent saying they found them to be proud. The old town of Lyon. Photo: Michael Muraz/Flickr
Among those who are considering changing their region, almost half say they are ready for a professional retraining, with 47 percent saying they would agree to lower wages in order to make their dream move come true.
But it's not only high earners who dream of leaving the daily grind of the French capital for a more peaceful existence elsewhere in France.
A survey carried out in June by French jobs website RegionsJob showed that 59 percent of workers in the greater Paris region of Ile-de-France want to leave their jobs and move away from the French capital.
This represented the highest figure of potential deserters of anywhere in France, showing that perhaps the allure of Paris isn't strong enough to make up for a the stresses of the French capital.
Five French words to learn
un cadre – high earner/executive/manager
Francilien/Francilienne – Inhabitant of the greater Paris region of Ile-de-France
le coût de la vie – cost of living
quitter – to leave
les atouts – advantages / attractive features