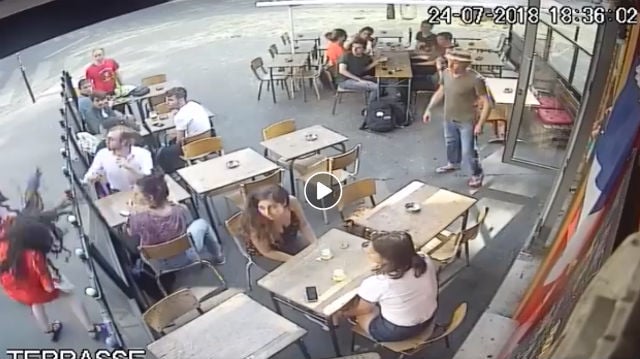 Surveillance footage of the incident shows a man hurling an ashtray from a table outside the cafe at Marie Laguerre, allegedly after she told him to “shut up” following lewd comments. He is then seen striking the woman across the face.

A police source said the suspect was detained Monday — as he was leaving a psychiatric hospital — on suspicion of assault and sexual harassment.
Laguerre was due to identify him.

Laguerre wrote on Facebook that she was returning home when a man started using “dirty language, in a humiliating and provocative manner”.

“I told him to shut up and kept walking away, because I can't stand this kind of behaviour. I can't keep quiet, and we mustn't keep quiet any longer,” she said.

The man then threw the ashtray at her before punching her in the face “in the middle of the street and in broad daylight, in front of dozens of witnesses”.

Laguerre set up a website after the incident, “Nous Toutes Harcelement” (We are all harassed), to collect similar stories after receiving messages of support from around the world.

French lawmakers passed a new law against sexist violence this month which makes catcalling in the street a crime punishable with on-the-spot fines.

The law covers behaviour including comments on a woman's looks or clothing, catcalling, intrusive questions, unwanted following and “upskirting” — taking pictures under a woman's dress without her knowing.