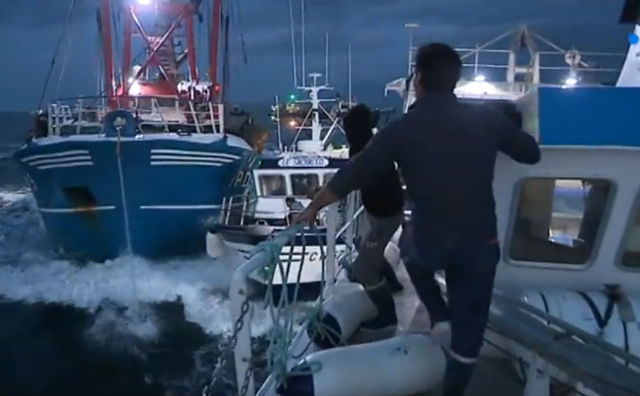 Images showed boats ramming into each other (see video below) and French fisheries representatives reported that rocks and other objects were thrown between vessels when the fishermen squared up to each other on the waters off the northern French coast.

Around 35 boats had left various ports in Normandy early on Tuesday morning to confront around five British boats that were fishing for scallops in international waters in the English Channel.

The French fishermen wanted to prevent their English counterparts from being able to take the scallops and so surrounded their boats.

“The French went to make contact with the British to prevent them from working,” Dimitri Rogoff, president of the Normandy fisheries committee told French media.

“Stones were thrown but there were no injuries or damage,” he said. “The French practically surrounded the British before they left the area.”

But France 3 reported that some boats suffered damage to their hulls after being rammed in the mayhem.

Images posted on the site showed two or three boats smashing into each other with a French fisherman shouting what appeared to be “putain…salop” or “fuck, you bastard” in the direction of another boat.

The site France 3 Normandie said the video showed the “The charge of an English ship during the clash between French and British fishermen!”

French gendarmes who were present at the confrontation then got involved to prevent an escalation.

The source of the problem is the regulations that the French scallop fishermen are subject to.

While it is illegal in France to fish for scallops between May 15th and October 1st the British fishermen are free to do as they like, especially given that the scallop field at the heart of the dispute was in international waters.

Yet for the last 10 days French fisherman from Normandy who rely on scallops for their livelihoods have grown increasingly frustrated at seeing their resource “pillaged”, while they have had to remain in port.

Talks have failed to resolve the row so there may yet be further confrontations to come.