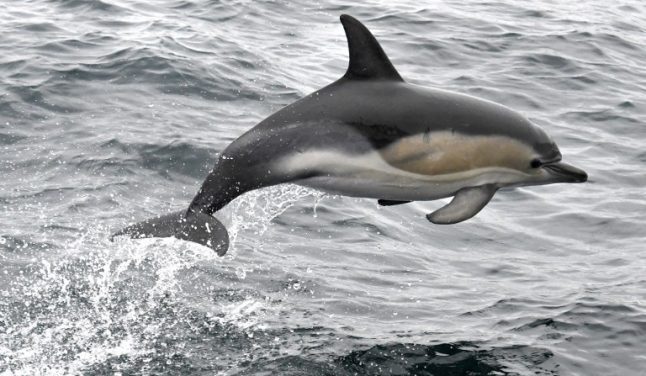 Illustration photo: Dophin in Brittany, AFP
Holidaymakers in a Brittany town haven't exactly been enjoying a relaxing summer break due to a dolphin that has been chasing and traumatizing some swimmers — all because it's in need of a lover.
Roger Lars, mayor of Landevennec, on the western tip of Brittany, had issued a ban on voluntarily approaching within 50 metres (yards) of the dolphin and
outlawed bathing and diving from the district's beaches whenever the animal is spotted in local waters.
The lustful dolphin has even gone as far as lifting a female bather out of the water with his snout, according to the mayor.
A rescue team had to come to the woman's aid to help her out of the water safely.
“I issued the decree to ensure safety… Several bathers were really afraid — he even lifted up a woman bather with his snout,” Lars told the local newspaper Ouest France.
However on Monday the ban was lifted after it appeared the frustrated Dolphin had headed elsewhere in Brittany to try to meet his needs.
Known affectionately by sports enthusiasts in the area as 'Zafar' the dolphin has previously been considered a sociable and friendly presence in the sea around the ​​town of Plougastel-Daoulas in the western Breton department of Finistère.
However since moving towards Landévennec, a town famous for its abbey, the dolphin's personality has changed considerably due to the fact that it is mating season for the aquatic mammal.
Rubbing himself against boats and chasing swimmers, the dolphin has attempted to bump bathers on more than one occasion.
Océanopolis, an aquarium in Brest in Brittany has backed the mayor's decision to ban swimming, warning people to “never get too close to a marine mammal at full sexual maturity”.
Sami Hassani, a specialist in marine mammals at the Oceanopolis sea park, said the dolphin could accidentally cause “serious injuries” with its tail fin.
Unsurprisingly, the dolphin's antics have aroused the curiosity of the town's residents who have been watching the mammal from the safety of the town's small port.
“It looks like a bull when he's not happy,” a young boy told Ouest France.
The mayor's ban had been deemed draconian by some.
Lawyer Erwan Le Cornec told AFP filed a petition to overturn the restrictions on the grounds of administrative over-reach.
“How many accidents involving a dolphin and a human have occurred in the region of Finistere since the two species have lived side-by-side?” he asked scornfully. “None.”
“With this decree the mayor is trying to make out that the dolphin is almost like a ferocious beast, something that is completely unpredictable, able to drown people.”
The mayor, he said, “will overturn the rightly positive approach that people have towards dolphins into a fear of these intelligent animals.”