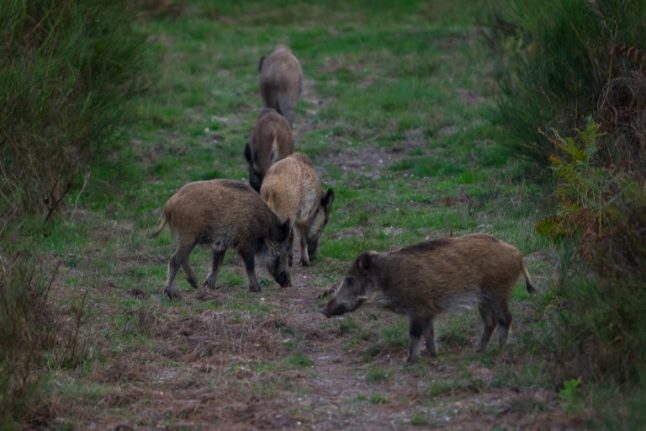 Photo: AFP
With a gaping hole in the ground and tangled corn stalks strewn across Yves Rolland's field, it looks as if it has been hit by a tornado. He already knows who the culprits are.
“Every year it gets worse. They destroy everything,” the French farmer fumes, striding through what's left of the crop.
“The boars come every night, in a pack. They nibble a little bit over here, a little bit over there, trampling on everything.”
Like farmers across Europe, Rolland is suffering the consequences of an explosion in the wild boar population over the past three decades, venturing off woodland in search of food.
They have already ravaged eight hectares (20 acres) of his land this year — 10 percent of his farm on the edge of the Paimpont forest in the northern French region of Brittany. Photo: AFP
As well as the valuable crops lost, the large bristly pigs have munched through feed he was growing for his livestock, which he will now have to buy.
“My father never saw boars when he was a farmer. Now we've been invaded,” he says.
The number of boars shot by French hunters gives an idea of how their numbers have soared.
Some 150,000 were killed in 1990-91, according to hunting authority ONCFS, but by 2016-17, the figure had swelled to 700,000.
“The animals are very fertile, reproducing quickly and adapting to pressure from hunting,” says ONCFS researcher Christine Saint-Andrieux.
Various factors have encouraged the pigs to multiply and to leave the woods, she says, notably urbanisation and climate change which is altering their traditional habitats.
Ageing hunters
In the Ille-et-Vilaine area of Brittany where Rolland lives, 3,000 boars have been killed this year, but farmers say recreational hunting is failing to keep their numbers in check.
Under the driving rain in a field near the Breton port city of Saint-Malo, a dozen farmers meet to brainstorm solutions.
“Some hunters are doing their bit but others prefer to hunt just on the weekends during the hunting season. They're not putting in the work,” one farmer grumbles. Paimpont forest which borders Yves Rolland's farm. Photo: AFP
Another charges that private companies that rent hunting land “feed the boars to create business and don't maintain their fences.”
The Regional Hunters' Federation offers compensation to farmers whose land is wrecked by boars, but Jean-Baptiste Mainsard, a member of France's Chamber of Agriculture, says it is not enough.
“When they send an expert who decides that the damage comes to less than 200 euros or three percent of the land, the farmer gets nothing and has to pay for sending them out,” Mainsard says.
Among possible solutions, he adds, “We have to make hunting easier.”
Regional measures such as a 50 euro ($57) fee for each boar shot discourage hunting, he complains.
Anger in the countryside
The farmers meeting near Saint-Malo have created a petition urging the state to act, including by setting up a volunteer hunting force that could spring into action when needed.
Regional hunting chief Andre Douard says he is already doing “everything possible to encourage” people to take aim at the pigs.
“Hunting is a hobby, it's voluntary. We don't have the power to force anyone,” he says. Photo: AFP
The 50 euro fee per boar goes to the compensation fund for farmers whose land gets trampled, he adds, so scrapping it would not help.
A large part of the problem, according to Douard, is that hunters are “getting older and rarer” as rural France empties out towards the cities.
One farmer warned that the boars could be “the straw that breaks the camel's back” for French farming, an industry already in crisis because of rising costs and falling prices.
Douard says that centrist President Emmanuel Macron is already aware of the problem.
Yet the boars add to a litany of issues causing anger in the countryside, where critics say their struggles are low down the list of priorities for the former investment banker.
Any government moves to encourage hunting will meet with stiff opposition from the animal rights lobby, however.
Actress and vocal animal rights activist Brigitte Bardot has already called on environment minister Nicolas Hulot to resign, saying he is not cracking down on hunting enough.