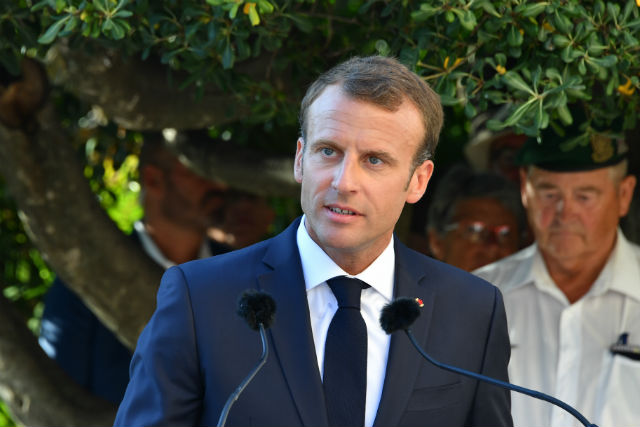 French President Emmanuel Macron at an event to celebrate the liberation of Bormes-les-Mimosas, southern France, on August 17. Photo: Yann Coatsaliou/AFP
Welcomed as a saviour of the European Union on his election last year, the French leader has seen his ambitious plans diluted as the 28 members' interests diverge, with challenges such as Brexit and the ongoing tussle over immigration into the bloc.
In a speech to ambassadors in Paris on Monday Macron is expected to underscore some of his signature projects, such as a single eurozone budget, a European defence force, the taxation of tech giants and a common policy on migrants.
But some of his main ideas clash with new populist governments in Eastern Europe and Italy, with right wing and upstart populist parties on the rise in countries across the region.
“(Since last year) the world has changed a lot with the upsurge of nationalism and the crisis of multinationalism. We must be even more dynamic in order to adapt to these developments,” said advisors at the Elysée Palace.
Macron has grappled with a damaging domestic scandal over a top aide that has distracted from his push for constitutional reform.
And internationally the French leader, lauded by supporters for his fresh approach, has yet to reap many rewards from his professed friendship with US President Donald Trump.
The approach has not prevented a burgeoning trans-Atlantic trade war, while Trump has also sought to scupper a landmark deal curbing Iran's nuclear programme and has blasted European nations over their spending on NATO.
“We are more in negotiations on procedures, like the eurozone budget, and less in the grand leap forward,” said Claire Demesmay, an analyst at the German Institute of Foreign Policy.
READ ALSO: France and Germany agree to set up eurozone budget
'Cannot lead alone'
In Europe, the issue of immigration has seen Hungary, Poland and now Italy pushing Eurosceptic and anti-immigration policies.
READ ALSO: 'I don't want EU led by France': Hungary PM
Migration is a hot-button issue in Italy, where hundreds of thousands of people have arrived since 2013 fleeing war, persecution and poverty in the Middle East, Africa and Asia.
Under EU rules people must seek asylum in their country of arrival, but Rome has increasingly barred boats from docking at its ports, forcing other nations to take some of those on board.
Italy's Deputy Prime Minister Luigi Di Maio on Friday said that his country was prepared to cut its EU contributions over the issue.
With Germany's Chancellor Angela Merkel also weakened by political crisis, Paris is now seeking a “progressive arc” of allies.
“When Macron was elected, everyone believed that the wave of populism was going to recede, that with Merkel he was going to form a formidable partnership that nothing could resist,” said Manuel Lafont-Rapnouil, of the European Council on Foreign Relations.
In a bid to drum up wider support, Macron will embark on a mini-European tour on Tuesday, with a three day visit to Denmark and Finland.
Francois Heisbourg, President of the International Institute for Strategic Studies in London, predicted that the bloc's “big compromises” would be made by the end of 2019, and said it was imperative that Macron establish a dialogue with Rome.
“He is the only leader in Europe today. Angela Merkel has limited room for manoeuvre and Europe can only move forward if France and Germany work together. Macron cannot be the only leader,” he said.