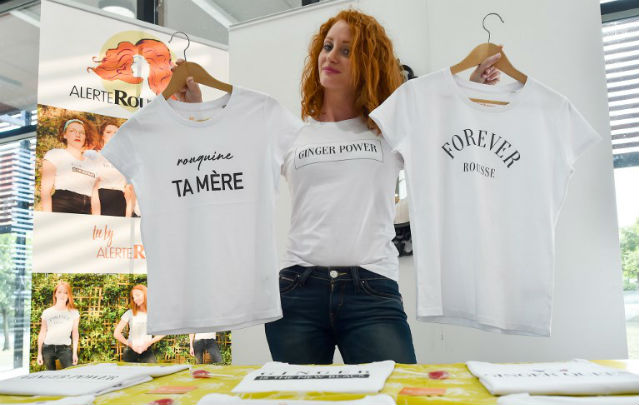 Redhead pride t-shirts selling at the Red Love festival. Photo: Jean-Francois Monier / AFP
“I was born red, I will stay red and I am beautiful like everyone around me,” declared Simon, a 32-year-old farm worker who travelled to the festival to hang out with “people like us”.
“I was teased when I was young, called named like 'carrot-top',” he added, “it's the same as if you're fat.”
Waiting to be served at a food truck, Liam Fife was standing with three friends he met at “Roodharigendag” (redhead day) the biggest get-together of redheads in the world which taken place every year in the Netherlands. Photo: Jean-Francois Monier / AFP
“Until I was 15, it was awful for me,” said the young man with a long red beard. “Now when I see a child I encourage them. I don't want them to be subjected to the same isolation,” he said at the festival, held in the Brittany town of Chateaugiron.
The festival-goers enjoyed concerts and shows including a fashion parade of 18 redheads in wedding dresses.
Among the best-selling items on display were T-shirts emblazoned with the slogan “Ginger is the new black”.
By midday, 1,200 people had showed up, said organiser Pascal Sacleux, who expressed the hope that “one day the jokes at the expense of redheads will be a thing of the past, when everyone realises how unfounded and stupid they are”.