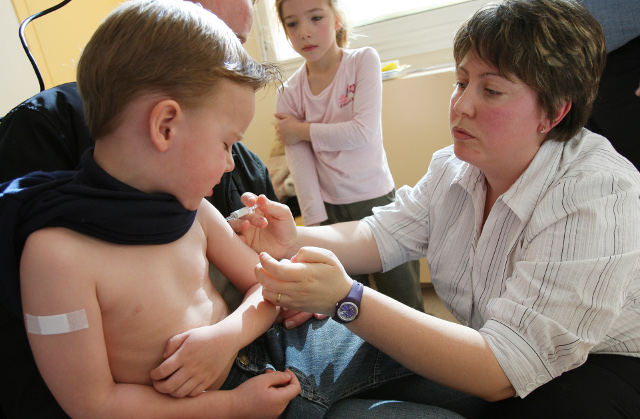 Photo: AFP
Measles has returned to Europe and it's taking its toll.
From January until June, the continent has been hit by the highly contagious, infectious disease, which has affected 41,000 children and adults and killed 37 people in Europe, including three in France.
To put these worrying statistics into perspective, in 2017 — which previously held the title as the worst year in a decade — just under 24,000 cases were reported for the whole year.
As a result, WHO is calling on those who don't already have had the measles vaccination to get it.
“Measles is one of the most contagious diseases,” Olivier Robineau, a specialist in infectious diseases at Tourcoing Hospital told Le Parisien.
“A single patient can infect 18 other people who have not been vaccinated or who did not have measles during their childhood.” Photo: AFP
The disease, which causes skin rashes and flu-like symptoms and can affect people of all ages — despite being considered primarily a childhood illness — is spread through coughing and sneezing.
France's public health authorities have registered 2,741 cases in the country since November 2017.
In June, a 26-year-old patient died in France from measles, which was the second fatality in a matter of months.
France is one of the worst hit countries along with Serbia, Russia, Italy, Georgia, Greece and Romania. However it is Ukraine that has suffered most from the spread of measles, recording 23,000 cases since the beginning of the year.
So, why is it so bad now?
The root of the problem seems to be, unsurprisingly enough, that not enough people are immunized against the disease.
“The return of the epidemic is the consequence of the vaccination coverage not being high enough,” said Robineau.
In France, as elsewhere, more than eight out of 10 measles patients had never been vaccinated against the virus, according to the European Center for Disease Prevention and Control (ECDC).
The reason behind this in France is partly down to a lack of trust in vaccines.
In 2016, a study by eBioMedecine revealed that France was the country in the world that was most skeptical about vaccinations, with 41 percent of those surveyed saying they felt that vaccines were not “safe”.
This distrust seems to have eased, however, with the most recent survey conducted by Ipsos in July 2018 showing that 83 percent of French people are now in favour of vaccination.
But in order to fight against the spread of the virus and hopefully eliminate it, at least 95 percent of the population of young children and young adults born since 1980 should have received both doses of the MMR vaccine, France public health authority (Sante Publique France) told Le Parisien.
By getting the vaccination, people not only protect themselves but also other more vulnerable people who are unable to get the MMR themselves.
Despite this, in France 90 percent of children received their first dose. However, only two thirds received their second.
As a result, France made the MMR vaccination, along with several others, including whooping cough, influenza and hepatitus B, obligatory for children born after January 1st 2018.
According to the Ministry of Health, people born before 1980 are less at risk of contamination because they have probably already had measles, which at one time affected hundreds of thousands of children each year.