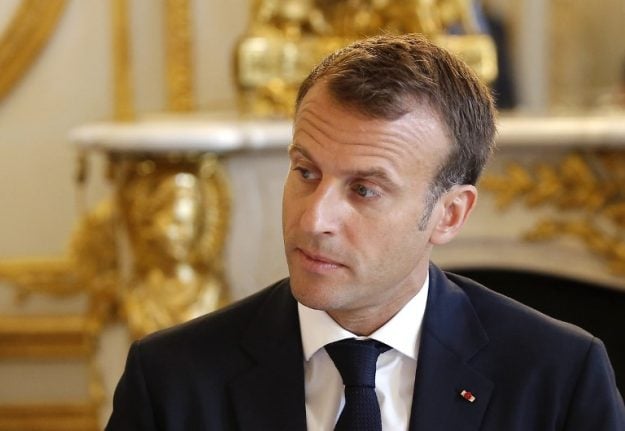 Photo: AFP
Here are six of the trickiest challenges awaiting him:
Public sector shake-up
Macron's pledge to slash 120,000 jobs out of 5.4 million jobs in France's heavily unionised public sector has already brought tens of thousands of protesters onto the streets.
The business-friendly former investment banker wants to make more use of private contractors and has raised the prospect of voluntary redundancies.
But unions say his plans are an attack on traditionally strong job security in the public sector, which represents some 21 percent of employment — among the highest rates in Europe. Photo: AFP
Consultations on the highly sensitive reforms are due to restart in September with the government hoping to draft legislation in early 2019.
Tough negotiations with unions and employers are also looming on changes to France's complex unemployment insurance system.
The government wants to set up a system which would deter companies from putting workers on endless short-term contracts which leave young people in particular with little job security.
The pensions taboo
Macron is daring to tread where many leaders have struggled by confronting one of the most explosive issues in French politics: pensions.
France has an unwieldy 42 pension schemes, each with different rights attached.
Macron wants a universal scheme under which every worker gets the same amount for each euro paid in — a system he says would be fairer as well as simpler. Photo: AFP
Previous reform attempts have repeatedly prompted an uproar, including in 1995 under president Jacques Chirac, who eventually abandoned his plans under
pressure from huge street protests.
The government, which will resume consultations with unions and employers in September, has already ruled out raising the minimum retirement age, fixed at 62 for most workers.
Tackling poverty
Macron is at pains to challenge critics who have branded him a “president of the rich”, charging that his liberalising economic policies — including tax cuts for the wealthiest — have left the poor behind.
Some 14 percent of France's population, including a fifth of children, live below the poverty line, scraping by on less than 1,008 euros ($1,152) a month.
Macron was due to unveil his anti-poverty plan in July but delayed it — apparently due to scheduling conflicts with the football World Cup — prompting critics to question his priorities. Photo: AFP
Set to include free breakfasts at school for poor pupils and extra cash for creches that take the poorest babies, it is now set to be unveiled mid-September and put into action next year.
Macron says the plan will be based on guiding people towards work, health, decent housing and education rather than “classic redistribution”.
Tightening budget
A day after returning to Paris from the sun-soaked south, Macron is due to meet Prime Minister Edouard Philippe on Wednesday to thrash out tricky changes to the budget.
He has already been trying to balance delicate priorities of major tax cuts combined with keeping the budget deficit under the European Union's 3.0 percent limit to placate EU partners.
But less cash is coming into state coffers than anticipated, complicating things further.
Having promised his tax cuts and labour law changes would kickstart the economy, Macron's government has had to revise down its growth forecasts to 1.8 percent this year, in part due to global trade woes.
Macron may now face a tough choice between more borrowing or deeper cuts to public spending.
Europe
Macron came to power last year vowing deep reforms to the EU but has so far found only tepid support for ambitious plans including a eurozone budget.
Challenges such as Brexit and an ongoing influx of migrants have jostled for attention, while unpredictable European parliament elections next year could throw another spanner in the works. Photo: AFP
The French president will head to Denmark and Finland from August 28 to 30, hoping to re-energise support for his reforms.
Image problems
A scandal over Macron's former bodyguard, filmed roughing up protesters while wearing a police helmet, created ample fodder for opponents just before the holidays.
Critics said Macron's handling of the “Benalla affair” reinforced his image as an aloof leader with monarchical leanings who was dismissive of democratic checks and balances.
The scandal has done little to help his feeble approval ratings.
In an Elabe poll this month, 60 percent said they did not trust the president, while YouGov gave him an approval rating of just 27 percent.