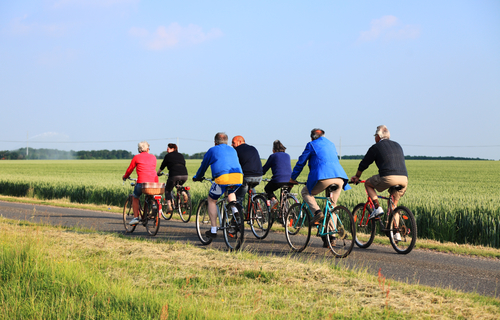 So what do you need to retire in France, regardless of where you’re from?

In a nutshell: a valid passport, proof of sufficient means of income, proof of medical insurance and proof of accommodation in France.

It may seem straightforward but depending on your particular set of circumstances it goes from easy to fairly challenging.

The criteria are obviously different for people from the EU and for those from outside, but both sides still have to complete a number of processes to obtain full long-term residency in France.

EU/EEA/Switzerland nationals…and Brits (for the moment)

Admittedly moving to France is a lot easier for EU/EEA/Swiss nationals.

It's no longer a requirement to register as a resident at your local town hall (mairie) within your first three months of living in France. As long as you have a valid EU passport and have proof of financial means, you’re sorted.

The latter is due to the fact that as a retiree you technically fall into the category of unemployed/not working.

You won’t be working in France or necessarily contributing to the country’s social security system so it’s important to be able to prove that you won’t be a burden to the state.

The EU Directive covering residency states that “the adequacy of your income will be determined taking into account your personal situation” and that countries shouldn’t simply apply the same fixed minimum income levels to everyone.

As of 1 April 2018 in France, if you're an expat under the age of 65 you must be able to prove you have access to €550 per month if it’s just you, €818 if you’re a couple and even more if you have any children or other dependents with you.

This can be verified through a pension scheme or with bank statements showing sufficient financial means to cover you for some time.

That’s if French authorities ask at all. After all France is the only EU country not to require EU citizens moving from another country to register or report their presence.

There are however some bureaucratic processes in France, and future developments on the horizon for some (yes, we’re referring to Brexit) that may mean you’re better off getting a carte de sejour sooner rather than later. The requirements may vary depending on your specific set of circumstances, so you’re better off talking directly to the mairie staff of the area you intend to live in and finding out what they require.

Use this link to find your corresponding town hall in France.

Getting French residency as an EU/EEA/Swiss national is free of charge and valid for up to five years.

Even if a residency permit isn’t a requirement by law, it is important to have some form of valid ID on you at all times, and have your EU passport with you in France too.

Once you’ve lived in France for five or more consecutive years, you have the right to permanent residency. But if you leave France for more than two years, you will lose this right.

FIND OUT MORE: Carte de séjour – How to get permanent residency in France

It’s clear to see that if you’re a retiree from EU/EEA/Switzerland, the legal difficulties of your retirement move to France are almost non-existent, but there are still many other complex matters to consider (pensions, health insurance, property etc).

Here is more detailed information on your rights as an EU citizen residing in another member country. If you’re not from the EU, gaining the right to long-term residence and retirement in France is a far more arduous and drawn-out process than if you’re from the bloc. But it’s not impossible.

A short-stay visa to scout out places to live in France:

The ease of getting a short-stay visa varies greatly depending on your country of origin, at least in terms of your initial visa entry into France.

Some non-EU countries have signed special agreements with France, including the US, Australia, Canada, Japan, New Zealand and Singapore (a full list can be found on france-visas.gouv.fr), allowing people from these nations to stay for up to 90 days without a visa.

The application fee is €60 for a short-stay visa, passports must be valid for at least three months beyond the date of expiry of the visa and you’ll have to provide proof of accommodation or at least the financial means to cover your stay (roughly €120 per day).

Application forms and the list of documents and more information required can be found on france-visas.gouv.fr . What can I do if I want to stay in France for longer than three months as a non-EU retiree?

People from certain countries can apply for a visa online via france-visas.gouv.fr whilst others will have to apply for visas at the French embassy or consulate in their country of residence (including renewals).

France doesn’t have a specific permit or visa designed solely for pensioners so you’ll need to apply for a visitor visa rather than an employee or self-employment permit.

As this feature is geared towards retirees who aren’t planning on working, the obvious choice is the visitor visa.

You of course can’t work on this permit and you have to show financial security and medical cover for the duration of your stay.

How much money will I need to prove I have?

The savings threshold for non-EU nationals since 1 April 2018 is:

However, it's your prefecture that will have the final say on what amount is enough for the area in which you're planning to live, so get in touch with them beforehand to form an idea.

Financial self-sufficiency can be proven either through bank statements or through a pension scheme that’s transferable to the French system. If you’re not eligible for national health cover, you’ll have to show your medical insurance covers at least €30,000.

SEE ALSO: Where is the cheapest place to live in France? What documents will I need to provide to apply?

You'll need filled-in questionnaires and application forms, a letter of explanation as to what you intend to do in France, letters promising that you won't work in France, proof that you can support yourself in France, proof of medical insurance, proof of accommodation in France and potentially a few other documents relating to your circumstances and country of origin.

You may well have to have documents translated and notarized.

Oh, and pay around €99 for the pleasure as a processing fee.

After this rather painstaking process, it should take a month to process your temporary visa/residence.

Applications can be submitted three months before entry to France (the visa can start either on the date of issue or on another date no later than three months after issue).

This pdf document by the French government offers even more specific information you’ll need when obtaining a long-stay visa or temporary residence. If my temporary visa/permit is approved, how long can I stay in France?

It will depend on what visa they give you but they’re generally valid for one year, although sometimes it can be as little as four months.

French authorities will decide on the grounds of what time period they deem you are eligible for.

On arriving in France, you must register with the French Immigration and Integration Office (OFII) if you were given a VLS-TS Long-stay visa.

In other cases you will be asked to apply for a residence permit at your relevant préfecture. Before you go to the prefecture, consult the website of the prefecture of your place of residence in order to find out what documents need to be provided. Some prefectures offer you the chance to make an appointment online.

What if I decide I want to stay longer than one year in France and definitely want to retire there?

If you want to stay on longer in France, you must apply for a renewable residence permit (carte de séjour) at your local préfecture, within two months of your visa/temporary residence permit running out.

You will again have to provide details of your family situation, financial means and health insurance, as well as proof of your address in France.

But if you find out exactly what it is that your prefecture requires you could get residence for up to four years.

That would mean you wouldn’t have to repeat the process over and over again until you are eligible for permanent residency after five years. So past that five-year mark, can I retire in France in peace without any more paperwork?

After living for five continuous years in France, you might be eligible to apply for a long-term carte de séjour or even French citizenship through naturalisation.

Bear in mind that the greater the attachment to France you seek the more scrutiny you’re likely to face from French authorities.

Either at this stage or earlier in your residency you may be asked to prove that you’ve lived in France uninterruptedly or for no less than six months per year, sit French language exams and provide other documents that confirm your integration into French society and that France is indeed your home. And I can also become French?

Yes, five years into your retirement in France you have the right to apply for citizenship.

Expect to face many if not all of the processes mentioned earlier in this feature – proof of finances, health cover, no criminal record, language aptitude, accommodation, integration and the mountain of paperwork that goes with it (although a lot of it you might have already by now).

It can take up to 2 years for your application to be approved so weigh up the pros and cons of this decision beforehand.

Some countries, including Britain, the US and Australia, allow you to hold dual French nationality but in other cases you might have to give up your original citizenship.