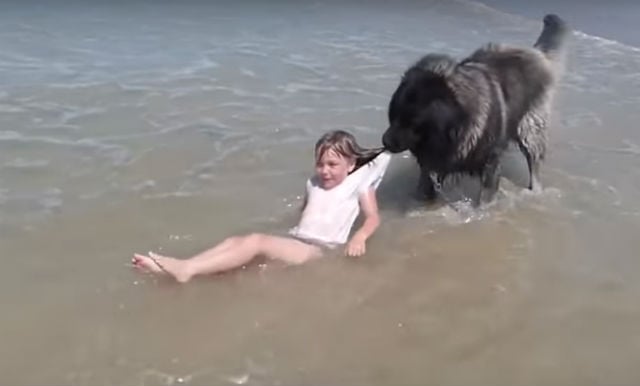 Photo: Screengrab/Youtube
The incident took place on the beach of Gouville-sur-Mer in France's northern Normandy region where the dog, named Matyas, was filmed in the process of saving a little girl knocked over by a wave.
At the beginning of the video you can see the pair enjoying the sea together.
But when the little girl, aged six or seven, is completely covered by a slightly larger wave, the dog, believed to be a Newfoundland, takes the girl's t-shirt gently in its mouth and pulls her to the safety of the beach.
Meanwhile, the girl appears to find the whole incident amusing
Since the video started sweeping the web in early August, Matyas who belongs to the little girl's grandparents has become a star of the web.