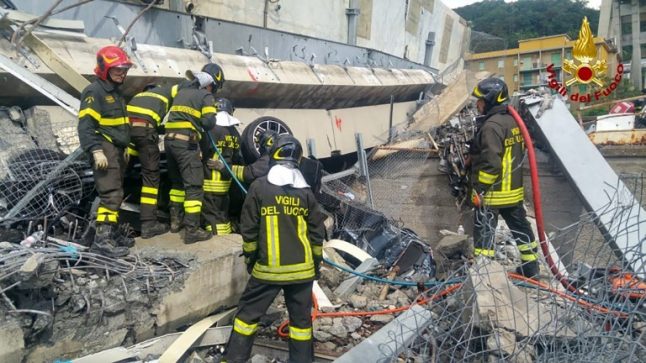 French authorities confirmed “with sadness” the presence of four French nationals among the victims of the Genoa disaster which took place on Tuesday.

According to the Italian media, three of the four French victims were barely twenty years old.

The group of friends named Melissa, Axelle, Nathan and William, according to the French press, were on their way to a techno festival in Italy.

In Nice, just 200km away from Genoa, mayor Christian Estrosihas has offered machinery to help remove the rubble. He has also announced Nice's hospitals are ready to care for the injured.

Cannes authorities have also offered help to Genoa and have hoisted the Italian tricolore flag at half-mast at the city hall and the historic Château de la Castre castle out of respect for the dead.

As many as 38 people were killed on Tuesday when a giant motorway bridge collapsed in Genoa in northwestern Italy.

Here's what we know about the bridge, the collapse and the response:

The Morandi viaduct, less than five kilometres (three miles) to the west of Genoa's old port, was built in the 1960s and completed in 1967.

The flyover of the A10 motorway, named after the architect who designed it, spanned railway lines, buildings and the Polcevera stream around 45 metres (over 140 feet) below.

Genoa's rugged terrain means that motorways that run through the city and the surrounding area are characterised by bridges and tunnels. Autostrade, a highway operator controlled by Atlantia which runs much of Italy's motorway network, said it had been carrying out maintenance work on the bridge.

Regional weather services had issued a storm warning for the morning of the collapse and the national police force said on Twitter the disaster happened amid a “violent cloudburst”.

The current death toll stands at 38 and there are 15 people injured but the numbers are expected to rise as 35 cars and several trucks fell from the crumbling bridge down onto the railway tracks below. Italy's national fire service said on Twitter that 200 of its emergency workers were involved in the rescue effort.

TV images showed rescue workers looking for other people under the rubble over six hours after the bridge crumbled.

Salvini said that he would investigate and find out who was responsible for the collapse, because “it's not possible that in 2018 you can work and die in these conditions”.

The spokesman for German Chancellor Angela Merkel said her “thoughts like those of so many Germans, are with the victims and their families”.

The European Commission President Jean-Claude Juncker said: “I express my deepest sympathy and sincere condolences to the families and friends of those who have died and to the Italian people.”

Shares in Atlantia plunged on the Milan stock exchange after the collapse.