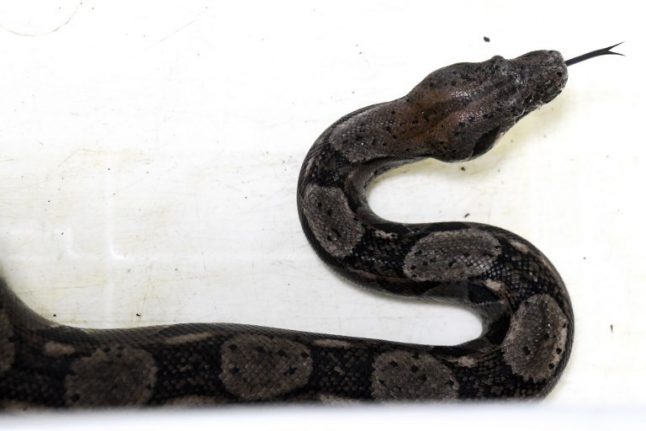 Illustration photo: AFP
There's no doubt that garbage collectors are used to coming across an array of weird and not so wonderful objects during a working day… but they aren't so used to being scared by a wild animal.
On Tuesday a group of garbage collectors in Marseille got a real scare when they came across a metre-long boa constrictor which was next to a vivarium — a container used for keeping and raising animals or plants for research — in a bin on Boulevard Francoise Duparc in the southern French city of Marseille.
READ ALSO:

It is believed the owner probably left the container there before going on holiday, according to French press reports.
The creature was quickly removed from the area by firefighters who brought along a specially trained dog to help them with the operation.
And while the garbage collectors were no doubt in shock, the deputy mayor of Marseille, Julien Ruas, who is in charge of the southern French city's firefighters, was downright furious.
“In my delegation, I often see surprising things, but this is the first time I've heard such a crazy and unacceptable story,” he said.
“I hope that an investigation will be opened and we will find the owner of this snake who is a madman: having dared to abandon his boa in a street in Marseille, I do not understand how people can do this!”
Ruas went on to say that although the bite of the boa is not deadly, it is still a bite of a reptile and he could have attacked the garbage men who were doing their job.
He thanked the garbage collectors “because they raised the alarm and kept an eye on the snake until the firefighters came to pick it up.”
But luckily for the snake, the story has a happy ending.
Since being discovered he has been named Jojo by a firefighter who has decided to adopt him.
Jojo is currently in quarantine to make sure he isn't carrying any parasites and will then join the firefighter's other pet snakes.