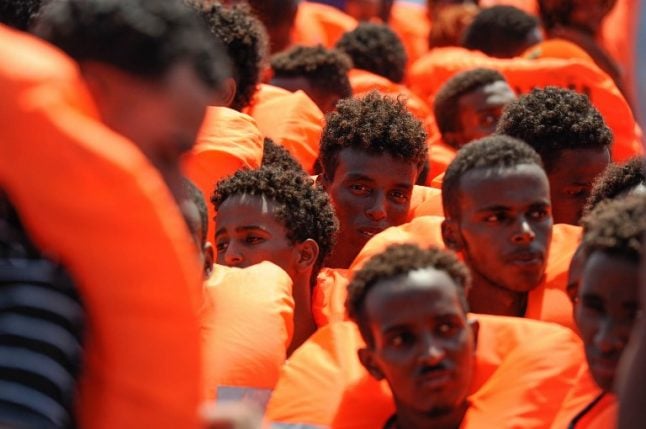 On Tuesday, five European countries agreed to take in the migrants to avoid another bitter dispute like the one in June when Italy and Malta turned the Aquarius away with 630 people onboard.

This time the Aquarius had been floating between Italy and Malta since carrying out two rescue missions off Libya on Friday — the crew desperately worried the standoff would repeat itself.

“We've been on standby since 8:00 am yesterday (Monday), exactly halfway between Malta and Italy,” said Aloys Vimard, a coordinator with Doctors Without Borders (MSF), one of two charities operating the ship.

Vimard, reached by telephone, said more than half of the passengers were minors — 73 in total, of whom 67 were travelling alone.

“A quarter of those on the boat are between 13 and 15, unaccompanied, and from either Eritrea or Somalia,” he told AFP. Both Horn of Africa countries remain deeply troubled — Somalia torn by violence among militias, Islamists and criminal gangs, while repressive Eritrea maintains an indefinite military service that has been likened to slavery by the United Nations.

While the bulk of the youngsters onboard the Aquarius are teenagers, Vimard said they were “still vulnerable.”

On Monday the crew organised a basketball match for the youngsters which briefly took their minds off their situation, he said.

“They have experienced such ordeals that they have impressive maturity and incredible resistance,” he added.

One of the teenagers, a 13-year-old boy, fled Somalia after his parents were killed in front of him.

Like many, he spoke of horrendous abuse after making his way to lawless Libya, “tortured for months with electric shocks”.

“He eventually got released because he asked the guards to kill him to end it all,” said Vimard. The crew had spent the last 24 hours, stranded at sea, attempting to reassure the migrants.

“We told them we'd do everything possible to find a place,” Vimard said. “That we wouldn't leave them.”

After the standoff in June, which eventually ended when Spain allowed the boat to land, the Aquarius docked in the southern French port of Marseille for a month of maintenance work.

Vimard said its upgraded facilities were a reflection of the fact that people were now spending more time onboard.

Before the arrival in June of Rome's new populist government, which says it has had enough of taking in migrant ships, there was no shower as passengers were usually just aboard for two days before disembarking in Italy.

Now all passengers shower systematically while other procedures have been changed to help prevent the spread of disease, Vimard said.

While the Aquarius crew is determined to keep picking up people they say would drown otherwise, Vimard fears governments will repeatedly turn them away, prompting standoff after standoff.

“The question now is how many times politicians are going to hold human lives in contempt,” he said, urging the European Union to “find a decent system to avoid managing rescues on a case-by-case basis”.

He accused European politicians of “discouraging the captains of rescue boats from rescuing people in distress, which is their duty as sailors”.

“It is terrible. It is the very nature of maritime rescue that is being called into question,” Vimard said. By the time the Aquarius reached one of the two boats whose passengers were rescued Friday, five ships had already passed by and done nothing to help them, he said.

These ships “changed course” despite the boat “being clearly in distress, wooden, unstable and overloaded.”

After the first dispute over the Aquarius, EU countries agreed to explore several new policies in a bid to cut off the influx towards Europe.

But “if we put up more barriers, people will take bigger and bigger risks,” Vimard said.