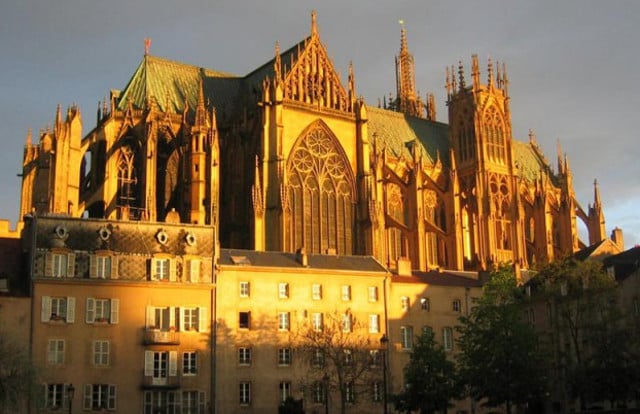 This exceptional Gothic church in the medieval village of Najac in southern France dates back to the 13th and 14th centuries and should not be missed if you are in the area.
Sitting on the hill in the shadow of the perched village's imposing chateau, the church commands breathtaking views across the surrounding forests of France's Aveyron department. Bourges Cathedral offers everything you could wish for in a cathedral: stunning design, breathtaking stained glass windows and an impressive collection of religious artworks. The cathedral is located on what was once the northeastern corner of the Gallo-Roman walled city.
Photo: Spencer Means/Flickr

You simply cannot go past the Laon cathedral, from the 12th century, which ranks up with Notre Dame in terms of France's top examples of Gothic architecture. Some say the Notre-Dame Cathedral in Chartres is even better than its tourist-packed namesake in the capital. Yes, the Chartres Cathedral is often cited as one of the best examples of French Gothic architecture, and is a Unesco World Heritage Site to boot.

Not strictly a church but too visually arresting to leave off a list dedicated to religious buildings, the abbey at Mont Saint Michel in Normandy is a must-visit if you are in north western France. The Roman Catholic church in Reims is one of France's most recognisable churches so no wonder it's a hit with the tourists with one million of them visiting every year. Designated a UNESCO world heritage site in 2010, Albi Cathedral is said by some to be the largest brick building in the world. Another Gothic stunner in the shape of Rouen Cathedral in northern France, which has the tallest church spire in the country.

The church is home to remains of the English king, Richard the Lionheart who ruled from 1189 to 1199. It wouldn't be fair to ignore the Le Mans Cathedral. Just seeing it from outside is enough to impress many, but we strongly recommend you go inside and take a closer look at the stained glass windows.
Photo: SelbyMay/WikiCommons
Metz Cathedral, eastern France
Sure, there are a lot of cathedrals in France, but few are as dazzling as the one in Metz, which was completed in 1550. As the largest Eastern Orthodox cathedral in Western Europe, the Russian Orthodox Cathedral in Nice was opened in 1912 with funds from  Russia's Tsar Nicholas II. The Grande Île area is a real attraction. Surrounded by two forks of the River Ill in Strasbourg and home to the magnificent Stransbourg Cathedral, it is also the location of four ancient churches and a palace all in one little district. Notre Dame du Haut, Ronchamp, eastern France
And here we have it, the quirky one.
Designed by internationally renowned Franco-Swiss architect Charles-Édouard Jeanneret, otherwise known as Le Corbusier, the simple design is nonetheless striking and attracts around 80,000 visitors every year.
Photo: Wojtek Gurak/Flickr
Saint Joseph's, Le Havre, northern France
A truly unique building to complete the list, Saint Joseph's church in Le Havre is considered the focal point of a city that was reconstructed after heavy bombing during World War II. Dedicated to the victims of the bombings, the church includes 12,768 pieces of stained-glass which reflect across the inside of the church creating a stunning effect.
Photo: Tom Spender/Flickr Photo: cefran_other/Flickr
An earlier version of this article was published in June 2017.