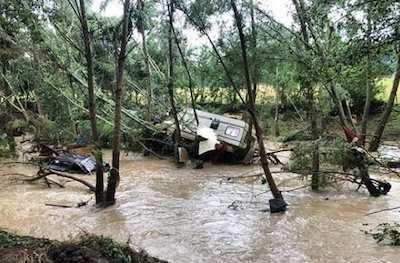 France’s summer weather continued to be one of extremes as scorching temperatures were replaced by violent storms across much of the country on Thursday, with the southwest and northeast of the country bearing the brunt of the severe weather.

In the Occitanie department of Gard in southern France 750 people, including 184 campers, had to be evacuated. Some also had to be taken to hospital for minor wounds and hypothermia. An elderly German man, who was helping supervise children one of the affected campsites, has been declared missing after being swept away by floodwaters, police said.

Up to 240 firefighters were mobilised in the department, as well as four helicopters and many gendarmes and military.

Several months of rain accumulation resulted in very heavy downpours in the southern department, with between 150 to 200 mm of rainfall in the worst affected areas.

To put it into context, the average rainfall for five months in Gard is 300 mm.

In Sauze, in neighbouring Ardèche the clouds poured 245 mm of rain on Thursday afternoon and evening, the equivalent of four months of precipitation.

Here are some more of the most eye-opening photos, videos and tweets from Thursday’s storms in France:

The above tweet shows how stormy weather was particularly severe in the Gard.

“Ardèche before and after the storm. Incredible,” this tweet reads

“Intense storm in progress in the #Gard's Saint-Ambroix. Torrential rains and gusts of wind of 90 km/h. In the #Cévennes Ardèche, 72 mm have already fallen”.

Footage showing just how strong the gusts of wind were on Thursday in Gard.

And so much rain fell that it inevitably resulted in flooding.

As the weather above map shows, 2018 is proving to be a record year for lightning strikes in France.

In the Var in France's southern PACA region, storms were also exceptionally violent and heavy rainfall caused floods, as this tweet shows.

Lightining striking in Bâtie-Neuve commune in the Hautes-Alpes department of southeastern France.