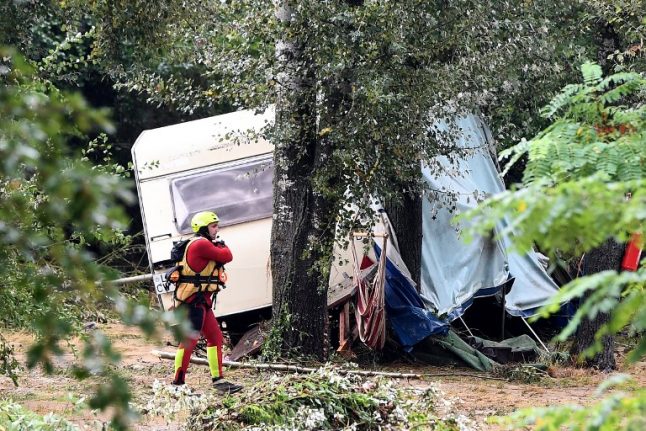 A rescuer walks in front of a damaged caravan in a camping as storms and heavy rains sweep across France on August 9, 2018 in Saint-Julien-de-Peyrolas. Photo: AFP
The 75-year-old man was accompanying a group of around 100 German children who were evacuated from a campsite in Saint-Julien-de-Peyrolas, some 60
kilometres (37 miles) north of Avignon in the Gard region.
Trapped by a muddy, fast-flowing torrent after the Ardeche river burst its banks he sought shelter inside his caravan, but the vehicle was swept away.
It was later found “empty and in pieces” near the river, police said. Photo: AFP
He was the only person unaccounted for after a rescue operation at three campsites in the area, where a heatwave ended abruptly this week in storms that caused flash flooding.
Divers were taking part in the search for the missing man, an AFP journalist at the scene said.
The group of 136 children and youths from the German city of Leverkusen, were now safe. Photo: AFP
Ten people were taken to hospital suffering from hypothermia and minor injuries, said regional police spokesman Jerome Tallaron.
According to the interior ministry, a total of 1,600 people, most of them campers, were evacuated as a precaution in Gard and the nearby Ardeche and Drome regions.
Several parts of central and southeast France are on flood alert after weeks of blazing temperatures erupted in storms on Thursday, turning several campsites into mudbaths.
Around 17,000 homes in the southwest and northeast were without power.