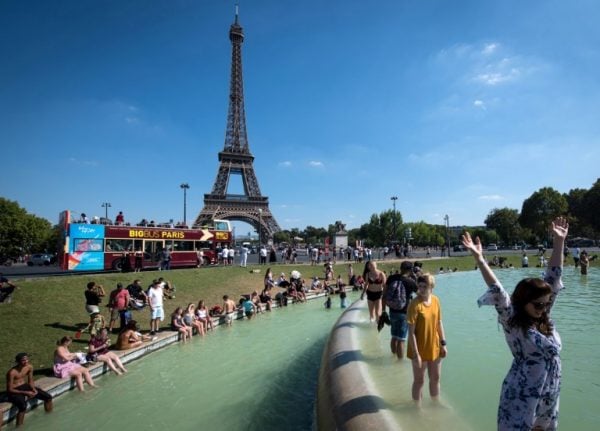 France's heatwave is set to continue, with the hottest weather yet expected on Monday and Tuesday across the country.

On Monday, temperatures could soar up to around 40C according to France's national weather agency Météo France.

France's met office has issued heatwave weather warnings for 67 departments out of 101 in France – a record first reached in June last year – and has warned against storms in the country's southeast in the afternoon, Le Parisien reported.

“The heatwave continues tomorrow Monday, with very high temperatures which will be difficult to bear. Be careful of storms on the southeast in the afternoon with a risk of hail,” the weather forecaster wrote on Twitter.

On Monday, the hottest parts of France will be in the southwestern regions, with temperatures in some cities reaching 36C in Toulouse and 37C in Bordeaux.

On Tuesday, Paris and the country's northeast and centre will be the most affected by the heat, with Lyon and Paris sweltering under 36C.

Meteorologist Guillaume Séchet, creator of the site meteo-paris.com, is referring to Tuesday as a “terrible day with 38-39C in Ile-de-France and highs of 40C around Bourges and Auxerre”.

There will be a gradual decline in temperatures in the south-east of France on Tuesday but it will remain very hot.

Fortunately, the mercury is expected to drop considerably by Wednesday and Thursday.

“All of a sudden, we will lose 10C in 24 hours in the North and return to a more normal 23 to 24 C in the second half of the week,” Guillaume Séchet told Le Parisien.

On Monday, traffic is being reduced in both Lyon and Paris to cut down on the smog with cars belonging to the most polluting category of vehicles being banned.

Similar measures were taken for three days in Paris in July.

Speed limits have also been lowered throughout the Ile de France region around Paris and in the east of the country.

Like much of Europe, France has been hit by a heatwave over the past week – which is already turning into the third hottest since temperatures have been recorded.

Last week, four nuclear reactors were forced to close in order to avoid raising the temperature of rivers whose water is used to cool reactors and then returned.

On Saturday, the southern town of Béziers in the Hérault department reached 41.3C. It was the hottest day in France since a deadly heatwave in 2003, that killed thousands of elderly people.

Heatwave: What are the highest temperatures ever recorded in France?

Respite is on its way though as storms ushering in cooler weather are expected from Wednesday according to Météo France.