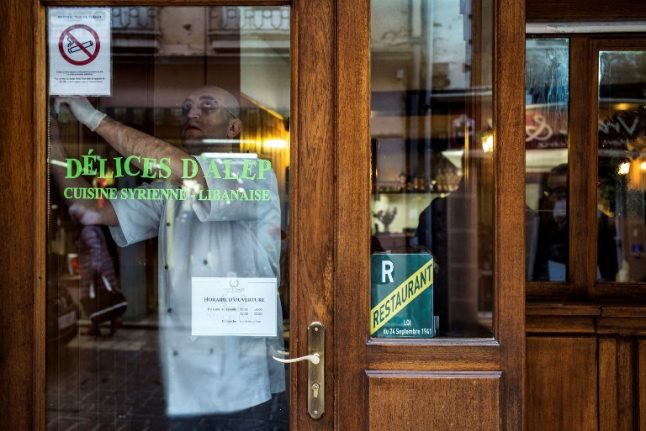 Photo: Jeff Pachoud/ AFP
In France, a country with a relatively high unemployment rate (9 percent compared to just over 4 percent in the UK), it seems odd that French restaurants and hotels should struggle to find workers.
Yet the industry is at pains to fill a staggering 130,000 job vacancies and is pleading the government to deliver work permits to illegal migrants so that they can do the job, according to Le Parisien.
“Faced with a dearth of workers, restaurant and hotel owners have asked the government to facilitate the delivery of work permits for undocumented foreigners,” the newspaper reported.
Industry unions deplore that people are increasingly turned off by working in restaurants and hotels because of the long hours involved and the often tiring and tedious nature of the work.
“Nowadays, people seem to think that if you’re not good at school, you’ll end up working in hotels and restaurants,” a representative of one of the industry’s union, Umih, told Le Parisien.
With restaurants and hotels desperately in need of workers, the industry is turning towards a demographic that's willing to do this kind of work: France's illegal immigrants.
Last month, the industry's unions teamed up to ask the government for help in recruiting these undocumented workers.
“Restaurants and hotel owners are in the starting blocks. We are now waiting for the government to give these people their work permits. We’ll provide the training and the work,” Didier Chenet, president of the GNI restaurant and hotel union told le Parisien.
READ ALSO: Paris restaurants open up kitchens to refugee chefs
In France, only migrants who are refugees are allowed to apply for a work permit. Those waiting to be given a refugee status are also eligible – but can start working only nine months after they have applied for work papers and only in sectors with an insufficient labour-force, such as the hotel and restaurant industry.
In November 2017, France's Interior Minister Gérard Collomb estimated the number of undocumented migrants living in France to be 300,000, around 0.5 percent of the population.