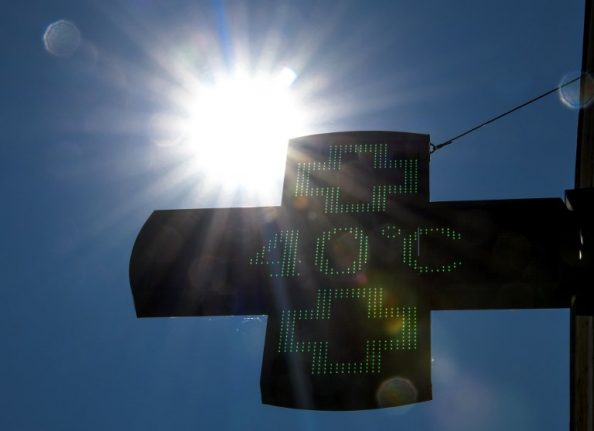 France’s Météo France weather body put 66 departments on orange alert on Thursday August 2, 2018, with temperatures expected to exceed 35 degrees Celsius in much of France’s western, eastern and interior regions over the following days.

Only Brittany, Normandy and Hauts de France in the north of the territory will escape the country’s latest heatwave.

In the south of France, temperatures will exceed 40C, suffering the consequences of an even more extreme heatwave hitting the Iberian peninsula that the UK’s Met Office says “could beat the all-time European continental record of 48C“.

It’s safe to say it’s about to get even hotter this summer in France, but will these extreme temperatures be the highest ever?

In 2017, four departments reached 42C (Alpes-de-Haute-Provence, Var, Bouches-du-Rhone and Gard), very high but not the hottest on record.

Here are the highest temperatures ever recorded in France and the towns and cities that had to withstand this scorching summer weather.

August 2003 was an exceptionally hot month in France, so much so that five spots on this top ten ranking are temperatures recorded during an eight-day period that month.

For the 5,000 residents of Decize – a quaint town slap bang in the middle of France – cooling down on this agonizing August day may have involved jumping head first into the river Loire, which luckily for them runs through the commune.

The ninth highest temperature in French history books was recorded the following day, further south in the department of Gard.

In fact, this Occitan department takes top spot on the podium and makes more appearances on this list than any other.

Chusclan is another tiny French municipality too far inland to have been saved by a cool sea breeze in those sweltering days in August 2013.

Not a single place that’s recorded one of France’s 10 highest temperatures is on the coast.

Around 15 km north-west of Vichy and 40 km north of Clermont-Ferrand lies this small village of roughly 1,000 people.

It’s been around for centuries but its main claim to fame is the extreme heat in recorded on the eve of Bastille Day 1983.

Spanish speakers may be amused by the fact that this Corsican town name sounds a lot like “frying pan” in Castilian (sartén).

For its 3,000 residents it must’ve certainly felt like they were being cooked alive by the sun. In 2017, Sartène came close to its previous record, reaching 42.1C. The hottest place in France in the 1940s was this small town in France’s Centre-Val de Loire region.

The almost 44C Le Blanc recorded has not been matched since in the area, with 37C being the highest departmental temperature in the summer of 2017, one of the hottest Julys and Augusts in France in recent years.

This village an hour from Marseille seems to be a place of weather extremes.

It recorded the fourth highest temperature ever in France in 2003 and in 2010 experienced severe floods and mudslides that also made national headlines. France’s southeastern Var region is no stranger to extreme temperatures, recording 42C in 2017 along with a number of other departments in the south.

Entrecasteaux, 62 kilometres from Saint Tropez, was the hottest place on record in France in the 1980s.

La Ville en Rose (the Pink City) turned red-hot on this roasting summer day 95 years ago, the earliest record on this list.

Toulouse was just 3 degrees off the hottest world temperature that year, 47 degrees in the North West Australian town of Marble Bar. Two villages a half an hour drive away from each in southern France both recorded the highest temperature ever in French history… on the same day!

It’s fair to say that the southeastern department of Gard was France’s hottest area that summer, during what meteorologists have labelled Europe’s worst heatwave since at least 1540. There were a staggering 14,802 heat-related deaths (mostly among the elderly) in France during July and August 2003, according to the country's National Institute of Health.

In the city of Auxerre in Burgundy, the temperature stayed above 40C for eight consecutive days. The capital of France’s Yonne department was also the hottest city in France that year with the mercury rising to 41.1C.

The heat map below shows the difference in average temperatures for countries in Europe (data from 2000, 2001, 2002 and 2004) compared to the heat levels reached between 20 July – 20 August 2003. Southern and western France clearly show the greatest temperature anomally in all of western Europe.

It was a particularly catastrophic summer for France, forcing authorities to think of new ways to prepare for weather extremes they had previously not encountered for such an extended period of time. Photo: Reto Stockli and Robert Simmon, based upon data provided by the MODIS Land Science Team/Wikicommons