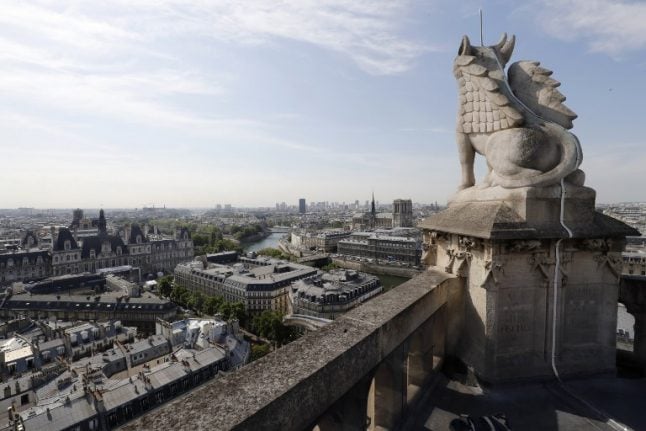 The view from Tour Saint-Jacques. Photo: AFP
Eiffel Tower workers are on strike over a new access policy for visitors which they say is generating “monstrous” waits at the famous tourist landmark.
But don't be disappointed, instead see it as an opportunity to check out one of the many other stunning views over Paris (many of which include the Eiffel Tower).
Parc de Belleville
Parc de Belleville is considered to be the highest park in Paris and as a result it has some of the best views over the city. For the best panoramas, head to the terrace at the very top of the park and get snapping. The view from Parc de Belleville. Photo: Sunny Ripert/Flickr
Institut du Monde Arab
This might not be the first place on your list of places to visit in Paris but the terrace on the ninth floor of the institute offers wonderful views of Notre-Dame Cathedral, the River Seine and the Marais, as enjoyed in the picture below by former president François Hollande. Tour Saint-Jacques
If you're prepared to climb to find some of the most spectacular panoramic views over Paris, look no further than Tour Saint-Jacques, which has the extra bonus of fewer crowds.
The only slight drawback is that the tower is only open on Friday, Saturday and Sundays (as well as Monday in July and August) and just 136 people can go on any one day. Get there before it opens at 10 am and buy a ticket for the 50 minute guided tour in advance and you won't regret it. The view from Tour Saint-Jacques. Photo: AFP
Montparnasse Tower
There's a saying suggesting the best view of Paris is from the Montparnasse Tower because it's the only place in the capital where you can't see the tower itself. A bit harsh, perhaps and quite frankly, a blatant theft of a Guy de Maupassant quote, who said the same thing about the Eiffel Tower.
Nevertheless, head to this tower for a fantastic view and an expensive cocktail at the top. But it's worth it – how often are you 210 metres above Paris? The view from the viewing deck at Montparnasse Tower. Photo: AFP
Sacré Coeur
Head up to Sacré-Coeur. It's a free view of the entire city and you get the chance to visit the beautiful chapel. You can even climb up to the dome for only €6 for an awesome view of the city with all the best monuments. The struggle of the staircases is definitely worth it (or you could always pay extra for the elevator). The view from Sacré-Coeur. Photo: AFP
Galeries Lafayette
For some of the best views of the city, visit the rooftop terrace at Galeries Lafayette or Printemps next door. From here, you'll find both a breathtaking view of the French capital and a virtual reality telescope, which gives you a view of the city as it would have been in 1912. The view over Paris from Galeries Lafayette. Photo: AFP
Arc de Triomphe
Like the Tour Saint-Jacques, seeing the view from the Arc de Triomphe involves a bit of leg work. But once you're up there, the whole of the city will be at your feet including the world's most famous avenue the Champs-Elysées. The view of the Eiffel Tower from the Arc de Triomphe. Photo: ros k @ getfunky_paris/Wikicommons
The Pantheon
Located in the Latin Quarter, the Pantheon mausoleum is where the French greats are laid to rest. And if you make the climb to its dome, you'll be rewarded with fantastic views over the city. The view over Paris from the Pantheon. Photo: prateekb/Flickr
Centre Pompidou
From the top of the Centre Pompidou art gallery, you'll get a great view of the Marais, Notre Dame and Sacre Coeur. And if you're willing to spend a bit more, you can enjoy the view for longer by getting a table at the gallery's Le Georges Restaurant and Bar. Musee d’Orsay
If you're a fan of the Sacré-Coeur, the view from the Musee d’Orsay art gallery is not to be missed. The white basilica is revealed in all its glory perched on the hill of Montmartre and you'll also get a stunning angle on the iconic architecture in the French capital and the River Seine. Photo: Neil and Kathy Carey/Flickr
Le Perchoir
If you'd like your view over the city to be accompanied by a delicious cocktail, Le Perchoir bar is the place for you. But remember to get there early as it's certainly no secret.
The people on the door also tend to pick and choose who gets in when it's busy, so it's better to turn up in couples or small groups. Hipsters seem to have no problem getting in, so it might be worth growing a moustache and a big beard if you're a guy to improve your chances.

Everyone knows that Notre-Dame Cathedral is spectacular to look at but if you're willing (and able) to climb to the top it also offers stunning views over the rest of Paris.