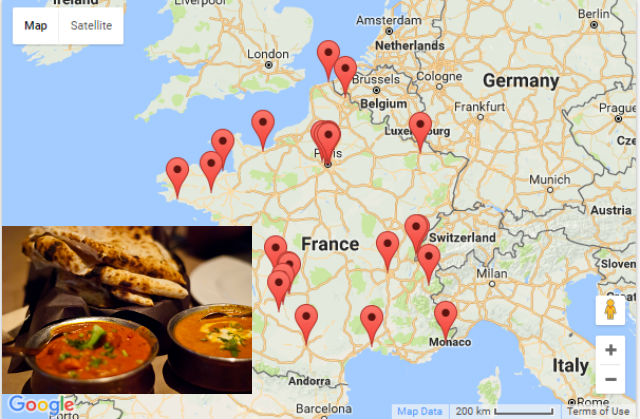 Photo: Google/SteFou!/Flickr
Curry lovers have long complained about the quality of spicy food on offer in France.
Recently a group of Brits based in France who yearned for a “proper Indian takeaway in France” even went as far as chartering their own plane, dubbed “curry air” to deliver a meal from the UK.
So for the sake of the spice deprived we've put together a list of reader-recommended curry restaurants in France so that you don't have to go to the same (extreme) lengths.
Le Penjab, Saint Malo (Brittany)
“When I visit St Malo (several times a year) I find Le Penjab comparable to anything we have here [Australia] with a good spicy vindaloo and everything else I’ve tried top notch too. I recommend you give it a chance,” said Kate O'Brien.
Le Tandoor, Clermont (Picardie)  * NEW
“We have lived in France for 16 years and finally found one I would be very happy to recommend. The owner is very friendly and open to suggestions/dietary requirements and even speaks some English. His Chef worked in London,” said Vanessa Powell. Photo: Ewan Munro/Flickr
Taj Mahal, Concarneau (Brittany)
Rajpoute, Ornex, near Geneva – eastern France
Karma Lounge, Ferney (near Geneva, Swiss border)  * NEW
“Good curries and delicious naans,” said Shizette Parker.
Bombay Busserie,  Allemans-du-Dropt (Lot et Garonne)
The Secret Curry Club, Dordogne (different towns)
The Secret Curry Club aims to serve up curries just as they're made in the UK. Favourite dishes including Kashmiri Chicken, Chicken Bhuna, Chicken Madras and Tarka Dhal are available at at local markets in Eymet, Riberac, Villereal and St Cypien every week.
Maharaja, Strasbourg ((Grand Est) * NEW
“Our previous go-to curry house. It's been a staple in Strasbourg for over 20 years, and remains one of the few restaurants (of any cuisine) open on a Monday evening,” said reader Gee Ranasinha. “They've recently changed chefs but if you advise them your preferences you'll be in for a treat.”
Namaste, Strasbourg (Grand Est) * NEW
Another recommendation from reader Gee Ranasinha.
He says: “Opened six months ago by Rajesh, previously head chef at Maharaja (see above) Rajesh is, quite simply, a magician. The depth of flavours, menu variety, spice palette, etc. is something really quite exceptional.
“Ask him to make any curry 'Gee-hot' and you'll be in for the meal of your life (plan ahead and put a toilet roll in le frigo for what happens later) but even if you're not up for the chilli challenge and just looking for a great-tasting Ruby Murray, you'll not find anything else that comes close. Easily as good a curry house as anything you'll find in London's Brick Lane. I'm not joking – this place is awesome.”
And here are our own recommendations:
Aux Comptoirs des Indes in the 11th arrondissemnt in Paris although you'll need to ask them to spice it up for you and Lakshmi Bhavan in the 9th arrondissement.
“Excellent!! Best Indian food I've had either in France or in the States,” said Jaclyn Anne.